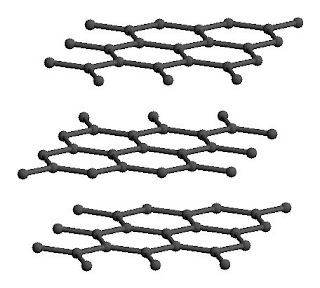 Whenever people see me working on a boat with a wooden frame, invariably, somebody comes along and wants to know if the same thing couldn't be done with carbon fiber composite technology. I generally tell them that it could be but I prefer wood and that they should try the carbon fiber composites if they think that those would be a good idea.
However, more recently, I am promoting the idea of wood as the original carbon fiber composite. See above for the molecular structure of graphite. Graphite is all carbon and the molecules are arranged in a hexagonal lattice.

Wood is made up of cellulose whose chemical arrangement is shown above. Note the hexagonal rings, similar to carbon rings of graphite. The main difference between cellulose and graphite is that cellulose has one oxygen in each ring which makes the ring a little weaker. Also strands of cellulose are held together with lignin, a natural glue. Strands of carbon fiber on the other hand need to be bonded together with epoxy, a man-made glue.
So carbon fiber composites are stronger than wood per unit weight, but not by enough to make me want to put up with the messy construction techniques that they require.
Note to Duane Strosaker - this is not a plastic mocking post. This is a post in defense of wood.
Note to everyone else - see Duane's web page on how to make carbon fiber paddles.

Posted by Wolfgang Brinck at 8:22 AM 2 comments:

If you're a native watercraft junkie like me, check out the Indigenous Boats blog by Bob Holtzman. Lots of good stuff there and Bob has tagged it so you can look up postings by topic. What a concept, as Yakov Smirnoff used to say.
Then there's also the 70.8% blog by Thomas Armstrong which is not strictly about native or indigenous boats but has some of that kind of content. Thomas has ads enabled so you get lots of links to boaty books on Amazon.
Posted by Wolfgang Brinck at 8:04 AM No comments: 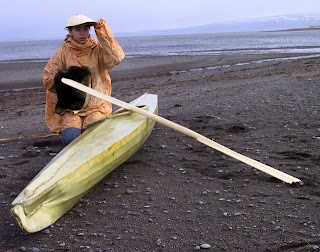 The Aleut Community in Alaska holds culture camps every year to teach school age kids about their heritage. Various instructors teach different skills like the Unangan language, crafts, dances, cooking and so on.
A few years back I was privileged to attend one of those camps in Cold Bay, Alaska to help with the building of some baidarkas.
The picture above shows Candace, a resident of Cold Bay with one of the baidarkas that the students built. She is also holding a fur seal skin and as the wind was blowing hard, she is hanging on to her hat, another item made in the camp.
This year, I am going back to Alaska to attend another culture camp, this one sponsored by the APIAI, Aleutian Pribilof Islands Association in Anchorage. Pictures to follow.
To see what last year's culture camp was like, read the newsletter of the APIAI.
Posted by Wolfgang Brinck at 7:43 AM No comments: 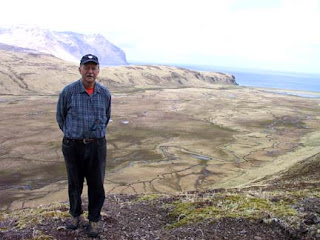 Somewhere on my webpage I put some pictures of what I call hot spring valley in Akutan, an island in the Aleutians. The Aleutians, you will remember are the place where the Baidarka was invented. Anyway, I put up a picture of myself at the crest of the pass overlooking the valley. 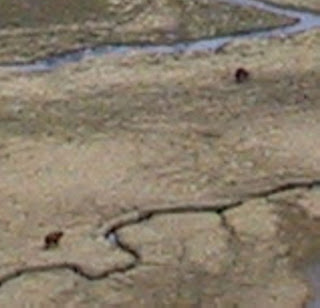 And, barely visible on the valley floors are some cows. The cows were imported by someone wanting to raise them on the one thing that is plentiful in Akutan, grass. That project was eventually abandoned, but the cows stayed behind and have made the hot springs valley their home. I imagine the hot springs keep the grass accessible in the winter and also offer some refuge from the cold. I don't know if the cows hang out in the hot pools up to their necks like those monkeys in Japan, probably not because they have to eat a good part of the day. Still, here they are surviving.
And then yesterday I get an email from a guy named Sam Brown who has just started building skin boats and in the letter, he tells me that it was his family who brought those cows to Akutan. Sam currently lives in Korea and this is where he has been building his skin boats. He also tells me that some of his Korean friends have caught the skinboat bug and want to build some.
So there you have it folks. More evidence that the internet brings people together and brings people together with their cows.
Posted by Wolfgang Brinck at 7:29 AM 2 comments:

There's lots of good stuff about boats out there on the internet. And other web authors must surely have links to the relevant pages. But that is not going to stop me from adding yet another list of links. I am going to put this list on my web page and also link to it from this blog. If anyone wants to have their boaty link on this list, let me know and I will add it. Put your suggested links in a comment to this post and I will get email.
Posted by Wolfgang Brinck at 8:27 AM 1 comment: 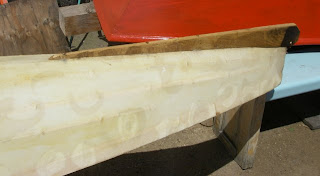 Last year I built a Point Hope kayak. Probably was used as some sort of retrieval kayak. Mostly, Pt. Hope hunters used umiaks to hunt, actually, they still do for the annual whale hunt.
Anyway, I like the boat but it didn't track worth a hoot (pulled that term out of my euphemizer) until after I added a skeg. The skeg worked great on flat water, but it was too much when the wind was blowing cause the nose would go downwind. See above for original configuration.

So I trimmed the skeg down and now the boat handles just fine. A few weeks ago it was blowing 35 mph in the bay with gusts up to 40. I took the pt. hoper out paddling and it did great. It kicked up a little spray, but the upturned nose never dove into any of the short waves, lifted right up and bobbed right along.
I think I paddled into the wind for about 20 minutes and then returned downwind in about 5.
Posted by Wolfgang Brinck at 11:03 AM No comments: 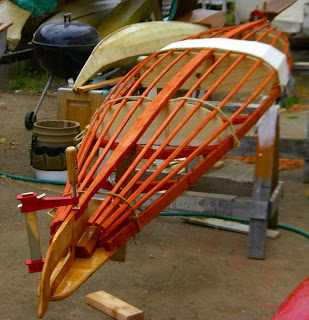 A year or so back, I built a King Island kayak and was amazed at how comfortable it was. Beam of the boat was 24 inches, depth at the rear of the cockpit was 15 inches, that is, the distance from the bottom of the keelson to the top of the cockpit rim. Length was about 15 feet. What made the boat so comfortable was the high coaming which made a very comfortable back rest.
So I wanted to make a baidarka that was equally comfortable if not more so and was also capable of some sailing but could still be paddled at a reasonable clip. Of course, as everyone mariner knows if you try to build a boat that is good at more than one thing, you're likely to end up with a boat that is good at none of them.
We'll see.
The design of the boat so far is as follows: Length of gunwales is 16 feet. LOA is about 18 feet. Beam is 32 inches. Depth to sheer at center is about 10 inches.
As the picture above shows, the bottom is pretty flat. I intentionally laid the keel out flat to minimize the amount of vee in the hull. I will be adding an external keel about 1.5 inches deep.
I don't have the sail plan worked out exactly yet, but it will probably look something like the sailplan that Ian Oughtred has designed for his interpretation of a McGregor sailing canoe. 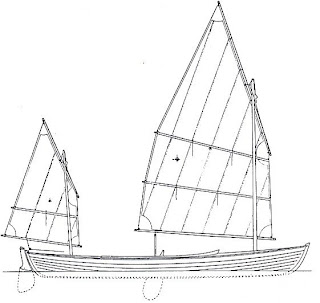 One more thing. The length of the cockpit will be 72 inches. I will be able to lay down in this boat and sleep. Providing of course that I will have some sort of anchor. Hence the name baidarko-lounger.
I have also been reading about sailing canoes. They used to be all the rage about the time that the 19th century turned into the 20th. Then along came paved roads and everyone stopped sailing in canoes in favor of the new fad called bicycling.
Anyway, the sailing canoes used to carry substantial amounts of ballast so they could carry more sail. A 60 pound centerboard made of steel plate was not uncommon. Not only was it heavy, it placed the weight about a foot below the keel of the canoe for maximum effect. Total ballast in these boats was as much as 120 lbs. So I'm going to look into ballast.
More to come.
Posted by Wolfgang Brinck at 10:11 AM 1 comment:

Fellow kayaker, Duane Strosaker pointed out to me that I haven't posted since forever. So here goes, more postings.
Today's topic is ergonometrics in reverse.
Ergonometrics is generally defined as using parts of your own body as a yardstick to measure lengths. Before measurements were standardized, everybody used to measure this way.
Ergonometrics in reverse is the measuring of your body with a tape measure to see how it will fit into your kayak.
In the picture above, I am lying on my back on a plank which is balanced on chunk of wood. The point is to slide back and forth on the plank until both the plank and I are balanced. Then I can measure from my feet to the balance point and record the number.
You could also do the same procedure sitting up. This would give you the location of your center of balance when sitting. When you position your own center of balance over the center of buoyancy of your kayak, then in theory, the kayak should trim correctly. The only problem is knowing your kayak's center of buoyancy. If you are a techno weenie and have a naval architecture cad program on your computer and actually know how to use it, then finding center of buoyancy is no problem. Such people do exist. I have seen them posting to kayaking discussion groups.
For the techno deficient among us, we have to proceed by trial and error. Once you have built a boat, you can simply move weight forward and backward in the boat to figure out where the boat trims correctly.
In my case, I already knew where the center of buoyancy of my next baidarka would be. Only problem was that instead of sitting in the kayak, I wanted to be able to recline in it. And that's why I needed my own center of balance or longitudinal center of mass when in the reclined position so I could position the long recliner style cockpit correctly.
I will be posting on the baidarko-lounger soon.
Posted by Wolfgang Brinck at 9:04 AM No comments: