The mesquite is a small leguminous tree that grows throughout the American Southwest.  It blooms early in the year and then, late in the year, it grows long beans that eventually drop to the ground.  Unlike the beans we typically eat, these beans stay in their pod which does not dry out and release the beans but stays whole and keeps the beans locked inside. 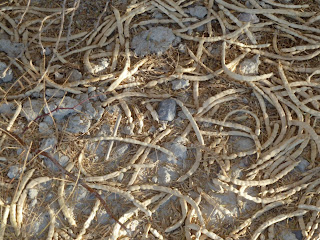 Mesquite beans on the ground under the mesquite tree.  In no time at all, you can collect enough for a meal. I did collect a bunch but made no attempt to eat them until I got home. 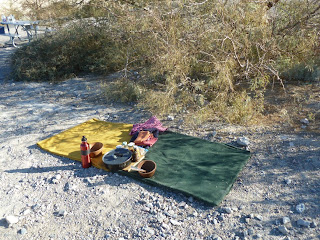 The collection site right behind our breakfast table.  The picture was taken in January and all the beans were on the ground. 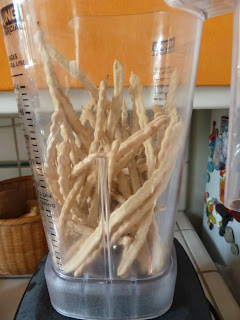 Back home, I tossed a bunch of the beans in a high power blender. 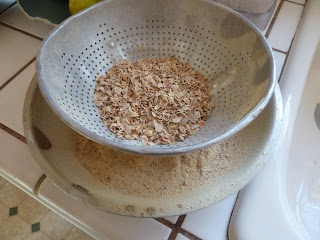 The ground up beans looked like this.  I sifted them through a colander. 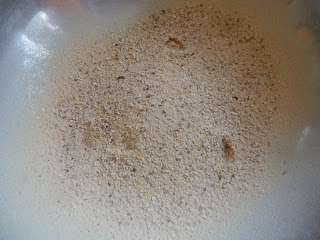 The sifted meal looked like this.  The meal is a combination of the ground up hull and the insides of the beans. 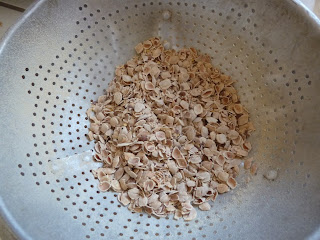 The shell of the bean itself resists grinding and gets tossed. 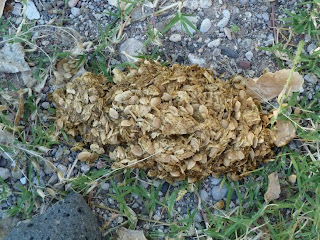 Animals on the other hand eat the whole thing, hull and bean, possibly doing some chewing and run it through their digestive tract and deposit the hulls on the ground.
The next step is to do something with the meal.  You can get recipes online or you can just improvise.  The mesquite meal is sweet with just a hint of sour.  You can make a rue with it and add it to soup or parch it in a pan and use it as a thickener for stews as you would any flour.  Unlike flower, it does have a distinctive taste, however which you may or may not like, mostly it is a little sour and sweet and you may need to experiment until you find where to put it into your food regimen.

Posted by Wolfgang Brinck at 9:04 AM No comments:

The Problem with Food 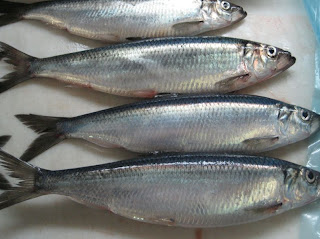 Recently, a friend gave me a few packages of fresh herring.  Herring were running in San Francisco Bay and he had caught and frozen about 150 pounds.  He urged me to give away as much herring as I could and to come back for more if I was successful.  Seemed like a good deal.  Just a few days earlier I had paid $5 a pound for herring at a fish market.  I also found out that herring wholesaled for $0.50 a pound.  That's a ten fold markup from wholesale to retail.  So here was a heck of a good deal, free herring that you would have to pay $5 a pound for at the store.
I got on the phone and called some Swedish friends who I was sure would want some herring because Swedes live by the sea and are fond of eating fish, or so I thought.  Turned out my friends were not that kind of Swedes.  They told me that they didn't care for cleaning fish.  But they would ask some other friends of theirs if they wanted some of the herring.  A little later they called back and said that they would take ten herring.  I told them that they were all frozen together in a package and the smallest quantity I could give them was 20.  Reluctantly they agreed to take one package.
So much for giving away food.
I suspect the problem with food is that we have gotten used to getting it in meal sized portions, all prepared and wrapped in plastic along with instructions for how to cook it.
The average consumer with a job who can afford to buy food seems to work until very late in the day and when he or she comes home is in no mood to deal with something that needs to be cleaned, possibly filleted and then cooked, especially if they have no clue on how to clean, fillet and cook something as exotic as a herring.  Much better to pull something out of the freezer and pop it in the microwave for 2 minutes. Like breaded fish sticks with no bones in them or pictures of dead dolphins on the package or anything unpleasant.
Another problem with food, particularly at the production end is that it doesn't come off some just in time supply chain.  It tends to for the most part be the result of some natural process that delivers a particular food in great quantities more or less all at once.  Most of the year there are no herring or cherries or sweet corn or peaches and then for a short time, there are more than you can eat unless you do something unpleasant and time-consuming like canning or otherwise preparing and freezing or salting and smoking your own food.  And who that spends ten to twelve hours in a cubicle or behind the counter of a convenience store wants to do that?
Posted by Wolfgang Brinck at 8:33 AM 1 comment: 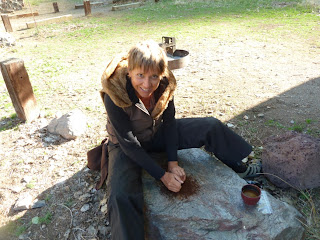 A year ago or so we ran out of coffee while camping and while in town, picked up some more coffee.  I checked the bag that the coffee was in and it felt pre-ground.  Next morning when we got up to make coffee, the beans turned out not to be ground.  Luckily, there was a large rock at the edge of the campground and the banks of the river across the street yielded a mano, the stone you hold in your hands to grind the corn. With a little practice we managed to make a fine grind and breakfast was saved. Of course, grinding stuff on stone grinders is nothing new.  It is in fact quite old and just recently, we visited Montezuma's Castle in Arizona where a number of stone grinders were on exhibit. 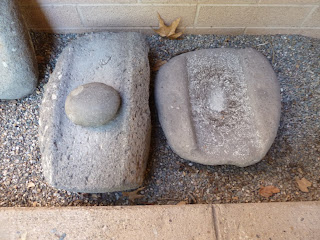 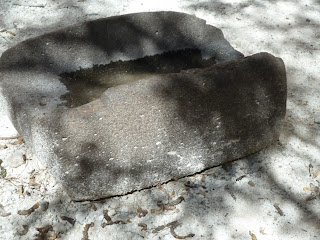 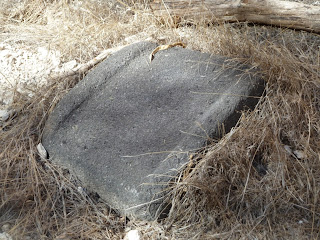 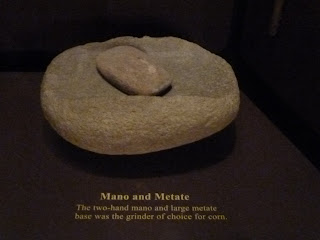 The stone grinders in the American Southwest are known as Mano and Metate, the metate being the large flat stone and the smaller one you grind with is called the Mano. 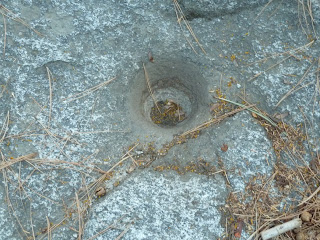 A slightly different arrangement visible throughout California are large flat boulders that were used for grinding acorns, a staple food in much of California before the arrival of the Europeans.  Unlike the metate which is flat, the grind stones for acorns have conical pits in them.  This prevents the acorns from spreading about.  Any that escape in the grinding process can be easily swept back into the hole. 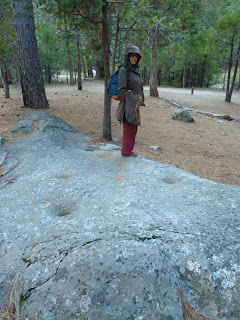 And here is a long view of the grinding rock.  Note that the rock had a number of pits in it and so had room for a number of women to go about their grinding in a sociable way.  The rock also happens to be conveniently located in a flat area surrounded by oaks.
Posted by Wolfgang Brinck at 8:22 AM No comments:

Preparing for the Apocalypse

I don't know how wide-spread fears of the apocalypse are but they seem to exist or these books wouldn't be written or movies wouldn't be made.

It used to be Nuclear Destruction that we feared the most, which is understandable since the government had an active policy of making us afraid of it, complete with drills and everything but that fear seems to have gone away since the real thing such as the disasters in Chernobyl and Fukushima though thoroughly awful seem to be viewed as local, survivable disasters.
In any case, the main reason I bring up the apocalypse is that sometimes I wonder how much my own fascination with primitive boat building technology is related to expectations of societal collapse.  I don't fear collapse, perhaps because I spent my first decade in a country that recovered from being bombed flat in WWII. I see collapse as survivable but having lived through a partial collapse I don't see it as entirely improbable either.

Meanwhile, I continue to build skin on frame kayaks because I love the technology and the boats.
Posted by Wolfgang Brinck at 8:31 AM 3 comments:

Sea Otters, the Dark Side 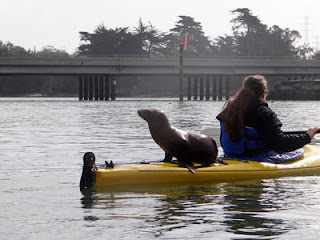 A male sea otter was making unwanted advances on a sea lion at Moss Landing, CA.  The sea lion took refuge on the back of a kayak that happened to be nearby.  Full story here. in the San Jose paper.
Apparently, although cute, sea lions have a behavioral dark side to them.
There might be a lesson there somehow.  So school children beware.  Cute does not mean harmless.