March 11, radioactive fallout from the reactors in Japan hit California.  I suspected that after crossing the Pacific, not that much radioactive dust would be left, but you never can tell. We get measurable amounts of pollution from China. So I went on the internet to see what I could find.  The first thing I found was a website that posts radiation readings. Here's what the map looks like.  Readings above 100 are supposed to be worrisome. California never got much above 30. The reason I wanted to know in the first place was that it was raining and I was going to go paddle my kayak and I didn't want to do it if there was going to be a bunch of radiation coming down with the rain the way it did in Kiev after Chernobyl blew up and the people were just walking around in the rain because nobody told them that there was a problem. 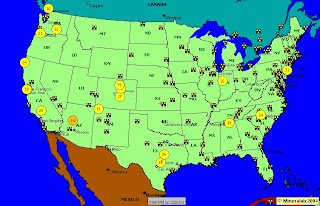 The way the site works is that they have people all over the country hook geiger counters up to their site and then they display the readings on that map.
The site also lists a bunch of geiger counter models that their software is compatible with.  So I looked one of them up.  Mostly I was curious what it would cost to have your own geiger counter. 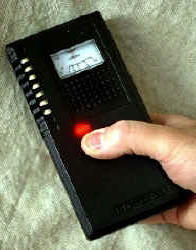 The pocket sized DX1 model is only $259.  Not bad. Only thing is, they're all sold out. Seems like curiosity about radiation levels is way up.
Quoting the home page of the geigercounters.com website:

We are SOLD OUT!
Update 3/25/11, 8:30 A. M.  It will be weeks to months before we will have Geiger Counters for sale again - sorry!  Read below.
Update 3/17/11, 5.03 A.M.  We are no longer accepting orders for Geiger Counters of any sort. If you have already placed an order, it will eventually get filled, in days, weeks, or months, depending on when you placed the order.  If not yet filled, your credit card has not been charged, and will not be charged until your order is ready to ship, and you may cancel your order at anytime up until then (do so by email only and put the word Cancel in the subject line).  We are generally not answering emails, and if you must contact us, make sure it is urgent, and call us by phone, but please be advised that the time we spend on the phone takes away from order fulfillment.  Thanks.
Yikes, looks like the geiger counter folks are going to have windfall profits this year. It also tells me that a number of people don't trust their government or their TVs or the internet, all of whom have put out fairly reassuring messages, i.e. nothing to worry about.
Posted by Wolfgang Brinck at 9:00 PM No comments:

It's a song title and it's an opportunity for me to trot out yet another Condor picture. 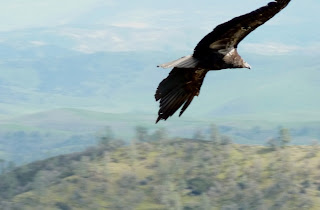 After spending 5 days at the Pinnacles in February, I went back to our local library and looked up condors.  Found two books.  Condor books are about as rare as condors themselves, actually more rare in our library than actual condors. I checked out the one called In Condor Country. Finished reading it today and right near the end found this quote by Ken Brower:

"When man and condor meet today, it is with a glance of mutual appraisal, each to see whether the other is yet extinct."
Posted by Wolfgang Brinck at 7:55 PM No comments: 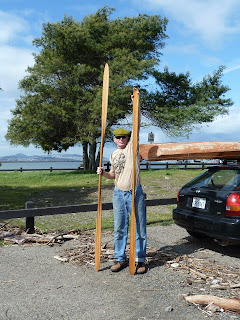 Tony Mullins likes long paddles.  A year or two back I made several long ones, based on some photos that Jeffrey Dickrell of Unalaska, AK had sent me.  The photo above shows Tony with a regular length Aleut paddle in his left hand and a nine footer that he calls Big Al in his right hand.
I took the photo right after a paddle that Tony and I had done on a windy day.  Water in SF bay is choppy and unsteady in high winds and a long paddle acts partly as a balancing pole and partly as a source of extra leverage for better control in the high winds.
But Tony has his own story to tell of how Big Al, the nine foot paddle helped him get through some rough swim escort duty the previous Friday.  Various organizations put on various swimming events in San Francisco bay throughout the year. The events usually end up at aquatic park which features a sandy beach and a sheltering pier that protects the beach from boat traffic. Tony's story in italics:


Friday, March 18th, two other paddlers and I volunteered as kayak escorts for a San Francisco Bay swim from the Golden Gate Bridge to Aquatic Park, a distance of about 2-1/2 miles. On that Friday morning there was very unstable weather that included high winds, heavy rain, a water spout off of Ocean Beach and a tornado 60 miles to the north.
I was paying close attention to the weather forecasts in the days before the swim & was most concerned about the high wind warnings. So, I decided to replace my “short” 8’4” Greenland paddle with my longer 9’ Aleut “Big-Al” because I wanted to get as much leverage as I could  for the potentially high winds.

The swimmers were originally scheduled to jump into the water  to the west of the bridge but were repositioned to just east of the bridge at about mid-span because of large swells…Almost as soon as they entered the water, the relatively large but even swells turned into troubled waters. Almost immediately my swimmer and I got caught in a  whirlpool which spun my boat in complete circles several times. I was very glad to have Big-Al to help punch me out of the swirl, although with my increasing anxiety I probably could have gotten out using bare hands! From then on all the way down to Aquatic Park, the winds became stronger and at times straight into our faces along with pounding rain as we paddled southward into the beach.

I’ve liked relatively long paddles for the past several years, but I liked Big-Al even more after it got me out of trouble on last Friday's swim escort! 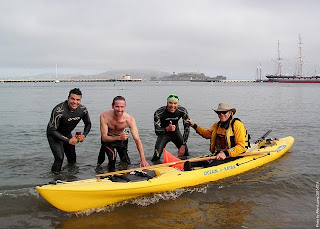 Tony and swimmers on the beach at Aquatic Park.  Behind them in the distance, Alcatraz. The Golden Gate is off  to their left and out of the picture.
Posted by Wolfgang Brinck at 11:53 AM No comments: 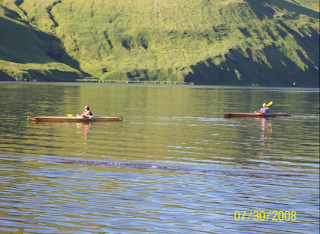 Back in 2004 I was up in Akutan, AK helping Kurt Schmidt and his junior high and high school class build some skin on frame baidarkas or iqyan in Unangam Tunuu, the Aleut language.  After I left, Kurt and class finished a bunch of the baidarkas.
Just the other day, Kurt sent me a picture someone had taken back in 2008.  Apparently the baidarkas are still cruising around on their home ground.
And here's some photos from 2004. 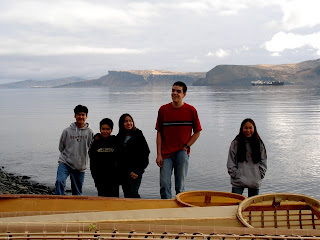 Students out front of the school facing the bay. 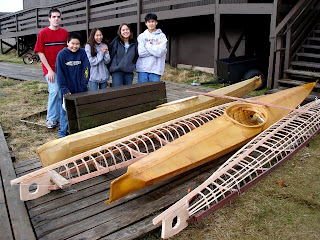 Students out front of the school facing the school Karen, the first to finish here baidarka trying it out. 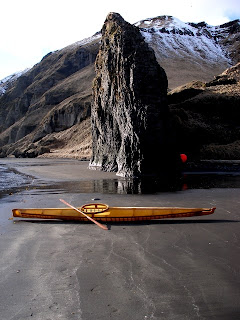 Baidarka a little ways down the bay. The red spot behind the rock is a buoy.  They get away from the fishermen.

DonJon in his Baidarka in the gym where all the baidarkas were built. 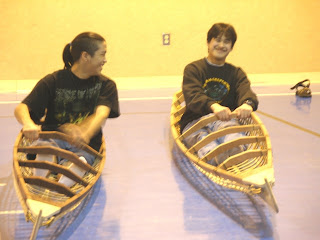 DonJon and friend trying out the new sleds. 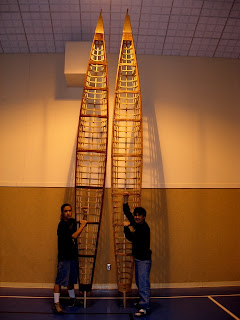 And standing them up.
Posted by Wolfgang Brinck at 9:33 AM 1 comment:

Diane got release 2.0 of her kayak trailer off the ground.  This one works much better than Release 1.0.  It's a basic off the shelf bike trailer with minimal mods, the main one being an extended tube connecting the trailer to the hitch. 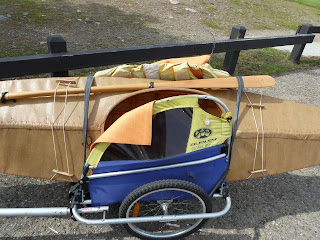 The kayak is held in place by two bicycle inner tubes.
Next project, how to get this rig on the trans-bay ferry.
Posted by Wolfgang Brinck at 1:09 PM 1 comment: 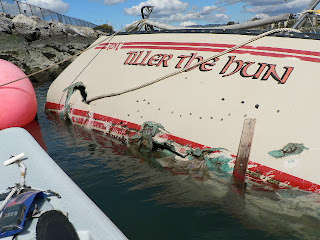 Fellow kayaker Tony sent me the following pictures of the boat that sank during a recent winter storm in SF Bay.  See my comments on that sinking in my two years before the mast post. Anyway, boats and rocks is a bad combo and no good comes of it.  So the more distance we keep between boats and rocks, the better. 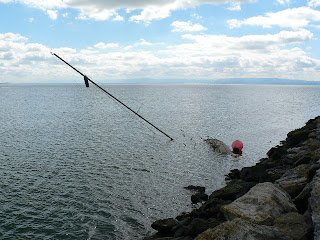 Hard to imagine the bay could blow a boat off its anchor when the sun is out and the water is flat on a day like this. 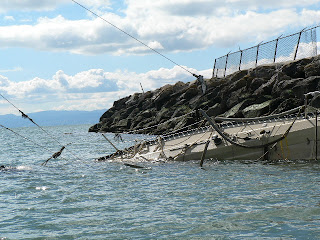 Posted by Wolfgang Brinck at 12:57 PM No comments: 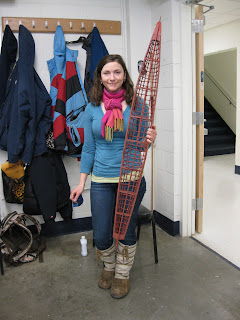 My friend Patty, Unangan bent-wood hat maker sent me this photo.  Sharon, the young woman in the picture made a scale model iqyax^ by following the instructions in my book.  The iqyax^ was in the UA Fairbanks Native Arts Exhibit.
Posted by Wolfgang Brinck at 12:46 PM No comments: