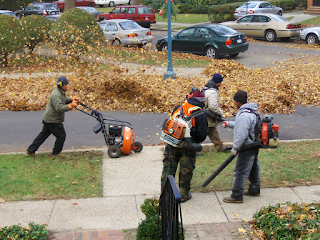 The other day, the gardeners were in our neighbor's back yard and blowing away at the leaves.  As they usually do, they try to corral the leaves in one corner of the yard where they can then scoop them up and haul them off somewhere.  Unfortunately, when they blow them up against the fence that separates them from our yard, a good deal of the leaves and other debris ends up in our yard.  So yes, I am one of those people that thinks that leaf blowers are a bad idea.
But that is not my main point here.  My point is to talk about a definition of entropy that sees it as a degree of disorder.  In this view, entropy is created when the world becomes more disordered.  The gardener with the leaf blower lowers the entropy in his client's back yard but increases the overall entropy of the neighborhood by expending energy to create more order in a specific place at the cost of the larger environment.
This is how living organisms operate as well.  They hold entropy at bay internally by increasing overall entropy in their environment.  And it is only by holding entropy at bay by sucking energy out of their environment that living organisms can stay alive.
Still, it would be good if gardeners could work out a better way to remove leaves than by leafblowing and still put food on their table.
Posted by Wolfgang Brinck at 10:35 AM 3 comments: 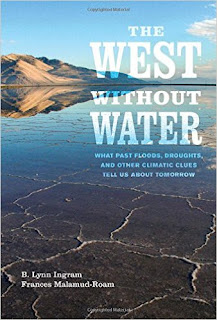 This is yet another California drought post, this one featuring a book by two women who know what they are talking about, that is, the climate of California since the last ice age.
The idea behind studying the earth's past climate is that we might be able to see patterns that could help us predict climate in the future.  Unfortunately, climate is capricious and the best that climate studies can do is to give us a smorgasbord of options.  Our options for California are periods of benign climate interspersed with droughts and floods.  California has been in a benign, wetter than usual period for about 150 years.  That period may now be ending.  The entire culture and economy of present day California has been built on top of the expectation that the past 150 years are what's normal for the climate of California.  Sure there isn't enough water in southern California to support large scale agriculture and cities, but with dams and aqueducts, water has been brought from elsewhere to make life in southern California possible.  Northern California fares a little better than the south but cities in Central California, like those that rim San Francisco bay have to import their water from out of the area.
The truth of the situation is that California does not have enough water to support a population of 39 million people indefinitely.  It has enough water if the climate is sufficiently wet.  But it isn't always.  There have been droughts that have lasted for 500 years, from AD 900 to AD 1400 for instance, much longer than California has existed as a state. The present culture of California could not exist in such a climate. Indian cultures have existed in all these varying climates but they were never as dense as the present population.  They were also not as settled and had a better sense of climate variability than the people who built the present day California.
For example, the Central Valley of California where some large part of the produce sold in the US is grown floods periodically.  The Indians tended not to build permanent settlements there.  They moved there when floods were not imminent and moved to higher ground when storms were likely.  The current culture on the other hand has built cities and farms in this flood plain that gets flooded in excess of ten feet every hundred years or so. The last great flood happened in 1862.  A flood of this magnitude happening today would destroy a good deal of housing and farms and also displace 6 million people.  It would also very likely drown much of the infrastructure that brings water to Los Angeles, San Francisco and other coastal cities.
So perhaps drought is not even the worst threat to California.  Drought is a threat to agriculture in California but then agriculture in California was never a good idea unless one is comfortable with the idea that it might only be a temporary arrangement.
Posted by Wolfgang Brinck at 10:19 AM No comments:

Across Atlantic Ice or people came to America by boat 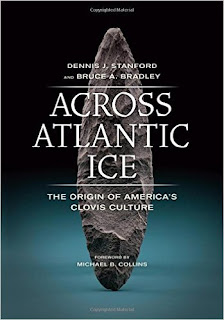 In their book Across Atlantic Ice, the authors posit the theory that people of the Clovis culture came to America along the edge of the ice sheet that went from the northern coast of Spain to the northern Atlantic coast of America.  The idea is that they traveled by boat, skinboat supposedly along the ice edge and ate sea mammals that they killed along the way.
You can read the book if you are interested in the details.  The main reason the authors posited their theory of migration by sea was that the mainstream theory which had people walking to America lacked any evidence to back it up.  Had the Clovis people walked to America, there should be some trace of their presence in the form of spear points found in Alaska or Siberia, but there wasn't.  Instead, the authors claim that the Clovis trail of artifacts leads back to the coast of Spain.
Critics of this theory say that there is no evidence of the boats that the Clovis people supposedly used to make their crossing.  Of course there wouldn't be after all this time because the organic materials that made up the boats would long have disappeared.
But the main thing that interests me about this dispute is the inability of modern people to imagine the ability of earlier humans to build boats.  It is also something that the authors accuse their critics of. In any case, there are other migrations that were made thousands of years ago, like the migration to Australia that left no evidence of boats although they could not have been made in any other way given that even at lowest sea levels there was water between their starting point and their destination.
Michael Collins, the author of the foreword to the book calls this inability to imagine that ancient people were as imaginative as contemporary humans paleoracism. I don't know that I would call that shortage of imagination racism, but it springs out of the same place that racism does, out of the inability to give others full credit for human abilities.
Posted by Wolfgang Brinck at 7:20 AM No comments:

Tumarayulit - Kayaks able to repair themselves 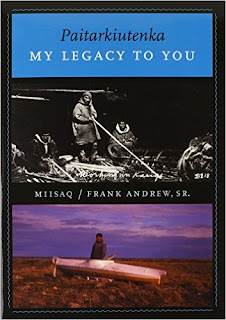 In Paitarkiutenka, My Legacy to You, Frank Andrews tells of kayaks able to repair themselves. On page 311 he says, "And some kayaks were endowed with supernatural attributes in the past.  At present, kayaks no longer have these qualities."
Apparently, some builders were able to build these kinds of kayaks. Andrews reports that it is said that the kayaks got this protection from destruction from the predecessors of the builders.
He tells of one instance where a builder's young son was angry at his father and attacked his father's kayak with an ax but was not able to hurt it even though it was only covered in painted canvas.
Posted by Wolfgang Brinck at 8:12 AM No comments: