I finally did it. Finished the EA kayak with some deviations from the traditional norm, painted it and headed out to the water to see how it paddled. 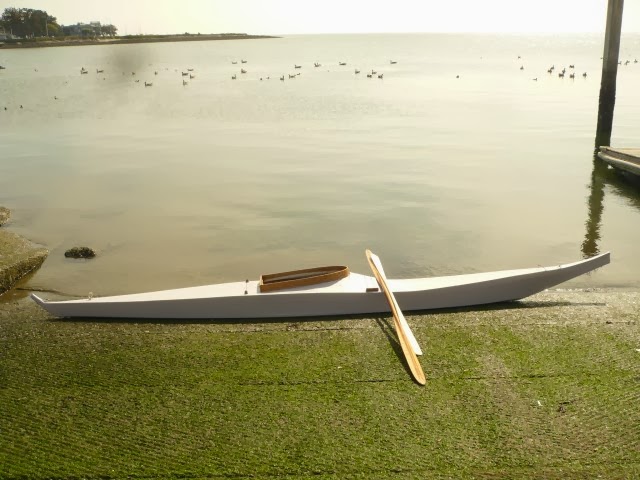 There it is by the side of the water.  Launch imminent as soon as I get in and start paddling.  Weight is between 50 and 60 pounds I'm guessing.  Length is just short of 18 feet about 16 of which are in the water. Beam is somewhere around 27 inches. Two paddles are resting on the boat.  One Greenland style, 88 inches long and the other, an Aleut style with a 3 inch wide blade at 120 inches long, yes, that's right, ten feet long.
The big question was what sort of speed a flat bottomed boat could be paddled.
I had my GPS with me.  At the start of the test while I was still fresh, I managed to get the boat up to 5.6 mph. Cruising speed seemed to be between 3 and 4 mph. I did my usual two mile circuit once around Ballena Island. Wind was variable, maybe up to 15 mph and wind blown waves were about 1 foot max.  So not much of a rough weather test.
Overall, the boat seems to move about adequately.  Turning with the flat bottom is easy.  The boat responds quickly.  I thought that staying on track might be a problem but it turned out not to be.  The boat had no particular tendency to turn into or out of the wind and it had adequate length so it wasn't yawing right and left with each stroke.  Paddling both down and upwind was possible without any undue steering effort required. So all in all, the boat performed well.  I would still like to take it out on a rough day when waves are more like two feet, like a normal summer afternoon on the bay.
I ended up using the 120 inch paddle for most of the trip since it seemed to be a better match to the boat than the 88 inch paddle which required more effort to reach the water.
Overall, I felt that I needed more experience with the boat.  The initial outing left me feeling that its weight and speed was such that I need to discover some more positive attributes for the boat or it would not get much use.
Speed is of course an ill defined measure.  What matters is efficiency.  Overall, the width and flat bottom of the boat are a combination that require a good deal more effort to make the boat go than just about any other kayak style that I have built.  If I were to build another version of this boat, I would probably decrease overall width and increase flare to the sides from the 10 degree flare that I put into this model. Increased flare would decrease the width of the bottom. I probably would also go with bent ribs to reduce weight of the boat and have some V in the bottom.  With lighter weight and less resistance  to movement this style of boat would be adequate for recreational use.
As I mentioned earlier, the boat also needs some rough water testing to see how the flat bottom handles going over waves.

Time to bring the EA kayak building project back to life, on this blog anyway.  Time to make some comments on the building experience, a time when the building is done but the boat hasn't been in the water yet and provided feedback on its suitability as a water craft.  I could have waited another few days to comment on the completion, but I'm thinking that once I try the boat out, I will become preoccupied with how the boat handles and forget all about what I learned from building it.
Part of what building an actual boat is all about is internalizing its structure in three dimensions.  Plans are flat representations of a boat and typically don't show any more than a top and a side view and some cross sections.  But the flow of the form of a boat in three dimensions is a lot more complex than the plans show and to get a feel for the form, you actually have to build the boat.  Once you have the feel, you gain the understanding of how that form interacts with the water and determines performance.
In any case, if you did some careful reading of the title of this posting, you may have noticed that called it Eastern Arctic-like Kayak.  What I mean by that is that when I laid out the shape of the kayak in the horizontal and vertical planes I improvised, that is, I didn't follow a particular plan but rather adapted length and beam to fit the wood that I had available.  I came close to building something that could be called Eastern Arctic, but not quite dead on.  Let's look at some photos. 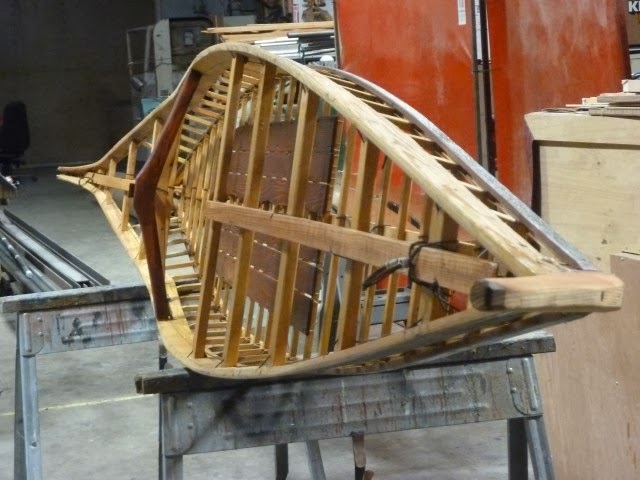 Here's a picture of the frame just before the skin went on.  If you let your eye follow the right gunwale line you will notice that it has some bumps in it.  I think in general EA kayaks had a smoother sheer line.

Here's a shot of the boat frame. Bow down.  As you can see, the plan view is more like a Greenland hull than an Eastern Arctic.  Part of the problem with working by eye in a tight space.  Should have dragged the frame outside at deck setup time for a better view and probably would have noticed that the back end should have been wider.  I suspect the boat will behave ok, just with a narrower stern won't have as much carrying capacity.  And anybody who knows anything will feel compelled to tell me that I didn't make the back wide enough.  Yeah, I know. 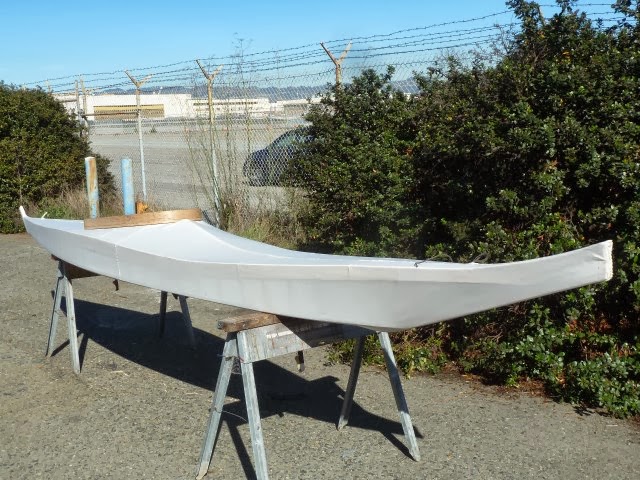 View from the side with the skin on.  The nose is unorthodox, a little taller than traditional.  Looks more like a northwest pacific canoe bow.  Also the sheer line is a tad extreme.  We'll see how that works out. 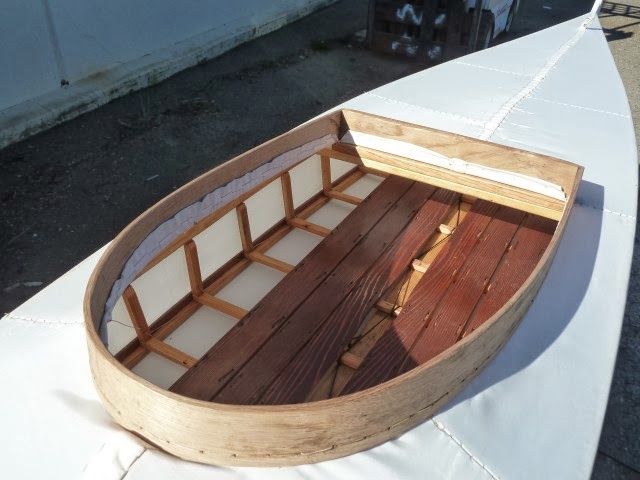 Meanwhile, the cockpit turned out more or less standard, maybe a few inches longer than traditional.  Soon this boat will have some paint and then hit the water.  Till then I'm holding off on any predictions re performance.  I am most curious to see how the flat bottom will feel and how much stability vs. speed tradeoff there is in such a flat bottom.  Stay tuned.

Technology brings us many wonderful gizmos and makes life as we are living it possible.  But as somebody once noted, "You can't make an omelette without breaking some eggs," the omelette being modern civilization and the eggs, well for lack of a better term, the natural world around us.
It just occurred to me after  my latest post on radiation ascended into the CLOUD, Google Division, that when we make omelettes, we like to crack more than one egg.  Take the Pacific Ocean.  That's a four egg omelette. Let me enumerate the four ways to crack these eggs. 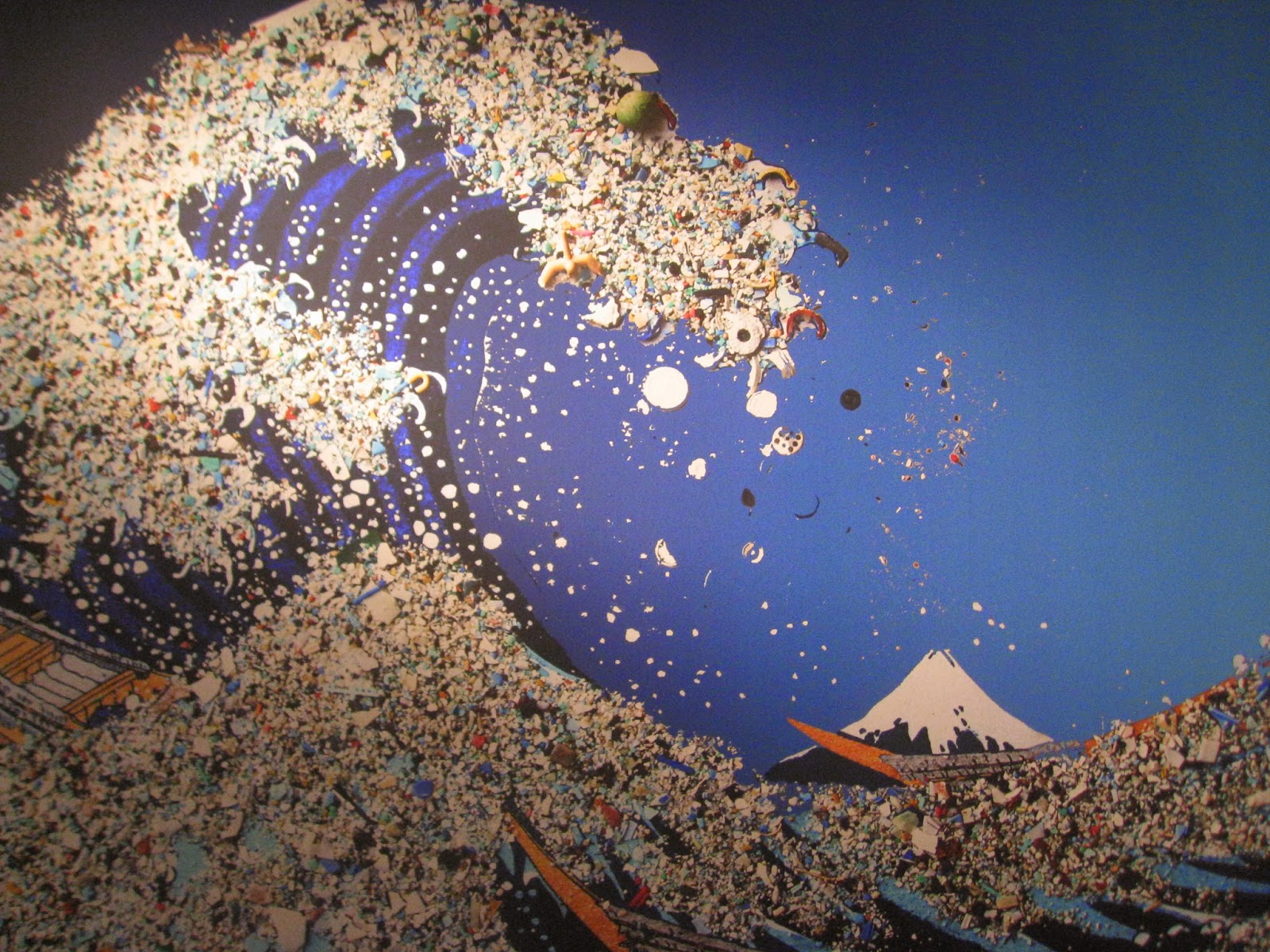 Overfishing - that's probably the oldest method of messing up the Pacific
The Plastic Gyres - dump plastic in the ocean, let it decompose and choke marine life with it.
Acidification - that scheme came to my consciousness about the same time as the Plastic Gyres. We generate CO2.  CO2 dissolves in the ocean and creates a mild acid and the acid dissolves the calcium carbonate that marine creatures need to make their bones out of.
Radioactive material - The amount that has been dumped into the Pacific is probably less harmful than acidification or overfishing, but who knows, we're not done dumping yet.
Posted by Wolfgang Brinck at 8:22 AM No comments:

You may or may not have heard about Fukushima, Japan where a few years ago a large earthquake and the giant wave that resulted from it badly damaged a number of nuclear reactors at an electric generating station adjacent to the Pacific Ocean. 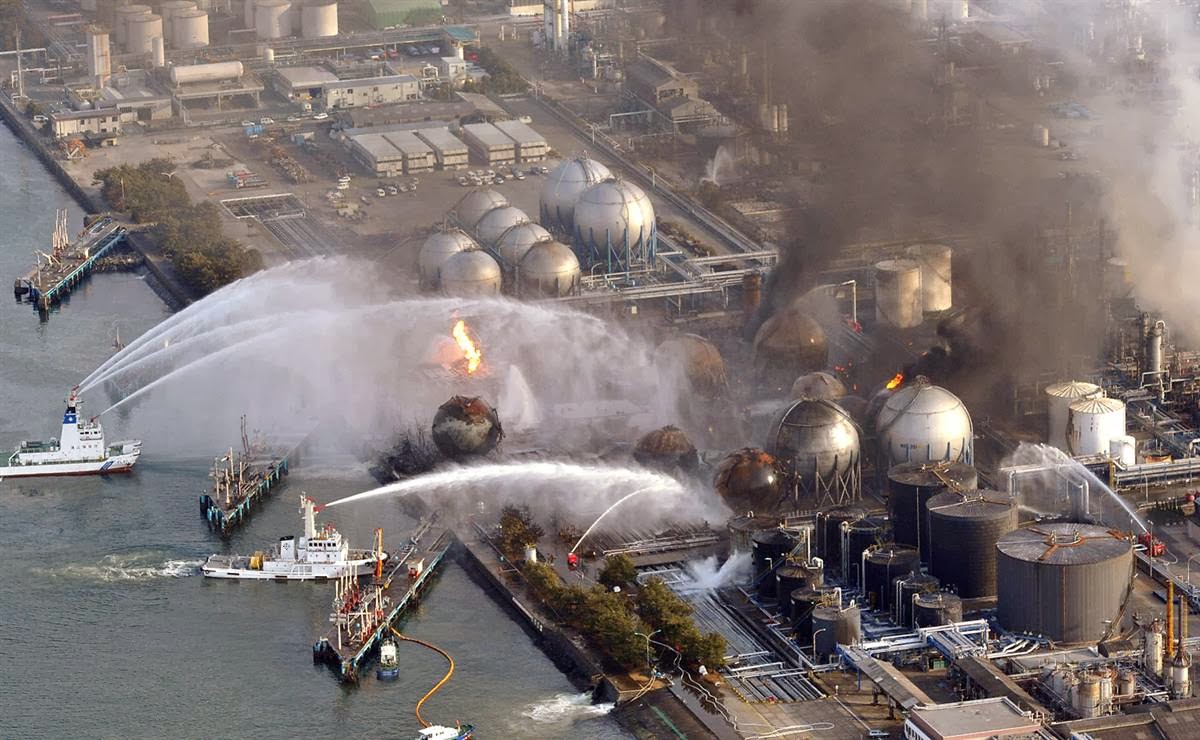 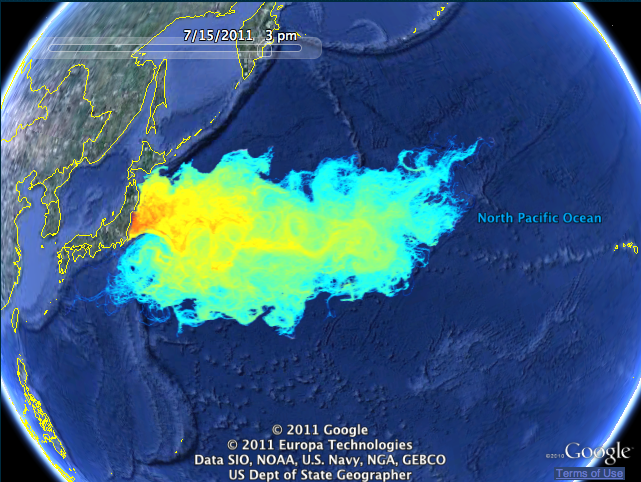 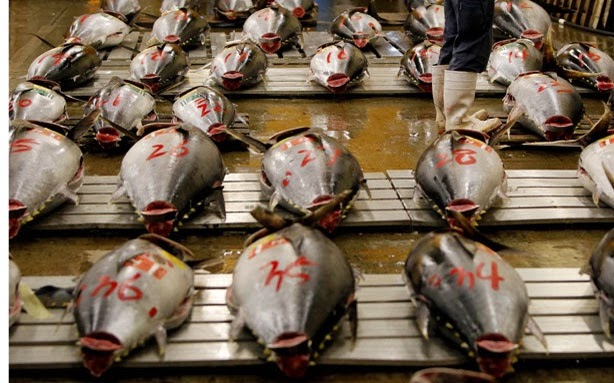 What is not clear is how harmful the radiation is.

One opinion - from the movie Repo Man quoted here.

"J. Frank Parnell: Ever been to Utah? Ra-di-a-tion. Yes, indeed. You hear the most outrageous lies about it. Half-baked goggle-box do-gooders telling everybody it's bad for you. Pernicious nonsense. Everybody could stand a hundred chest X-rays a year. They ought to have them, too. When they canceled the project it almost did me in. One day my mind was full to bursting. The next day - nothing. Swept away. But I'll show them. I had a lobotomy in the end.
Otto: Lobotomy? Isn't that for loonies?
Parnell: Not at all. Friend of mine had one. Designer of the neutron bomb. You ever hear of the neutron bomb? Destroys people - leaves buildings standing. Fits in a suitcase. It's so small, no one knows it's there until - BLAMMO. Eyes melt, skin explodes, everybody dead. So immoral, working on the thing can drive you mad. That's what happened to this friend of mine. So he had a lobotomy. Now he's well again."
Others are not so optimistic.
I am personally curious - so I bought a radiation detector and started measuring radiation on my own.  More on the results in another post.
Posted by Wolfgang Brinck at 7:54 AM No comments: