I haven't done much boat building lately since I have been busy working on a yurt.  Though this blog is supposed to be all about skin on frame boats, I thought it would be OK to indulge in some related skin on frame construction, namely, the yurt or portable dwelling.
The idea of building a yurt came to me after last year's October camping trip.  We were pretty far south but at high elevation and so we encountered snow and cold nights at times.  We had an adequate tent and warm sleeping bags but the sun went down early each day and then stayed away for twelve hours so that once it got dark there was little to do but crawl into the bags and listen to books on our mp3 players.  Camp fires and eating are usually good camping entertainments, but most campsites have fire rings that keep the heat of the fire away from the camper and otherwise hamper what should be a good entertainment.  Likewise, cooking food when it is near freezing is possible but once the food is done, it gets cold in a hurry and then you have to clean up in the dark and cold.
So the idea of a tent that was big enough to stand up in and build a fire or set up a camp stove in and cook in and eat in, all in comfort and warmth wormed its way into my consciousness.  The idea of a tipi came to mind, but those require long poles and a lot of canvas and would add a lot of bulk to an already bulky camping load. So then I thought about yurts.  And as a little research showed, there were lots of articles on the topic on the internet.
In addition, my neighbor, Tim Anderson had built a yurt and so I could use him as a technical adviser.  So off I went on the yurt adventure.  I quickly found out when doing the research that everyone builds yurts their own way and nobody seems to tell you much about general principles like how strong to make the walls or what the pitch of the roof should be, whether the thing will hold up to a snow load, heavy winds and so on.  And so I decided to build a prototype yurt that could sit behind the shop.  I would use it to work out the design details and once that was done, I would build a smaller more portable and lightweight yurt for camping.
So here goes with the photos. 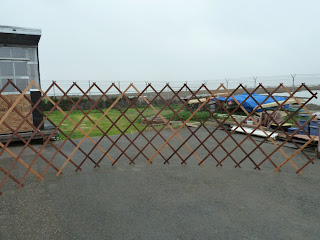 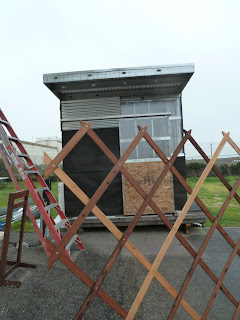 Here's a closer up view of the wall with another semi-nomadic structure behind it.  Nomadic if movable by fork lift fits your definition of nomadic.  In any case, for the sake of convenience the wall of a yurt is usually constructed in sections so that each section is of a size that is easy to lift and not too wide to transport. 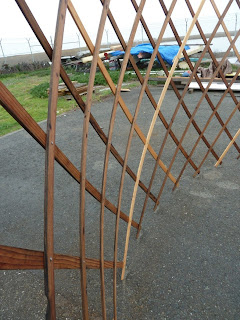 And here's a shot that tries to show the curvature of the lattice wall.  Hard to visualize this sort of thing until you actually build the wall. 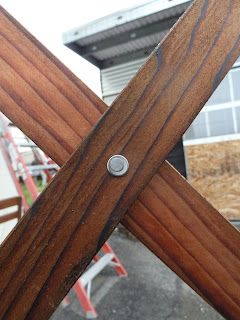 Intersections of the wall slats are held together with clinched nails, that is nails whose tips are bent over and hammered down and buried in the wood. 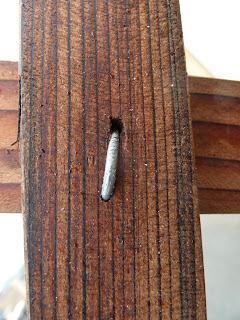 Here's a view of the junction from the other side where the tip of the nail is buried in the slat. 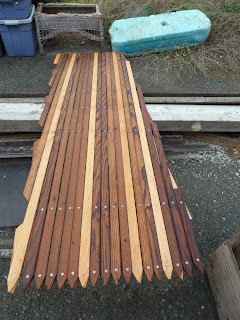 And here is one section of the wall, all folded up into a 30 inch wide section.  When unfolded, this represents 24 feet of wall. 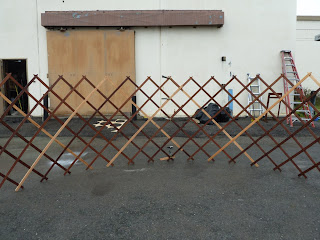 When the two sections of wall are joined as shown here (temporary joint made with clamps) the wall is complete.  And the 96 inch long slats at an angle make the wall 72 inches tall. 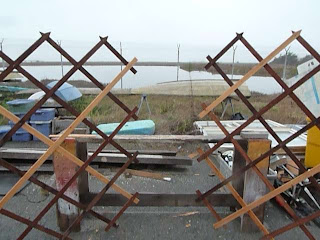 The other two ends of the two wall sections will get connected to a door frame, not yet built.  Note alternating colors of wood.  I had enough old redwood deck boards to make almost the whole wall but had to buy a few extra doug fir two by fours to top off the number.  The redwood was free and light.  The doug fir was about ten dollars total and stronger than the redwood but also heavier.  We will see how they hold up over time.
Stay tuned for door frame, roof and canvas cover yet to come.
Posted by Wolfgang Brinck at 9:33 AM No comments: