A few weeks ago we left Death Valley by heading West at Panamint Springs to get over to Highway 395 which runs up Owens Valley.  The name Owens Valley probably does not mean anything to most people and probably shouldn't unless they live there or unless they've read Mark Reisner's Cadillac Desert or watched the movie Chinatown.

Owen's valley drains the runoff from the Eastern slope of the Sierra Nevada and the Inyo and White mountains and several other mountain ranges to the east of the valley.  These waters are drained from the valley by the Owens River which at one time formed Owens Lake pictured above.
It is hard to tell from the picture, but Owens Lake is mostly empty of water.  Water coming down the Owens River from the north is collected in a reservoir a little ways north of the former Lake Owens and from thence diverted into a pipeline through which it is pumped some 200 miles to Los Angeles.
You can see the valley downstream from the lake below.

If you click on the picture, you can read the green roadsign at the left.  Los Angeles 187 miles to the south, Bishop 80 miles to the north.  At this point, there is no more Owens river.  The Owens river has been diverted into the Los Angeles aqueduct.  Evident in the photo above are cottonwoods, a sign that there is still some water available to sustain these water loving trees in an otherwise desert landscape.
So here we were driving south on 395 going parallel to the river bed of the former river and I mused out loud that maybe it's OK for LA to suck all the water out of the Owens River since does it really matter whether the river is sucked dry by farmers and ranchers living in Owens Valley or by the LA water utility?  Either way,  the local ecology is unbalanced for the benefit of people and at a cost to everyone else both plant and animal who lived off the water of the Owens River before European immigrants diverted it for human consumption.
My wife came down on the side of local consumption of water and I probably have to agree with her. But still, the reality is that LA by applying money and the laws of private property was able to get possession of this natural resource and export it for the greater benefit of the LA real estate industry. But things may change in the future.
Posted by Wolfgang Brinck at 7:41 AM No comments: 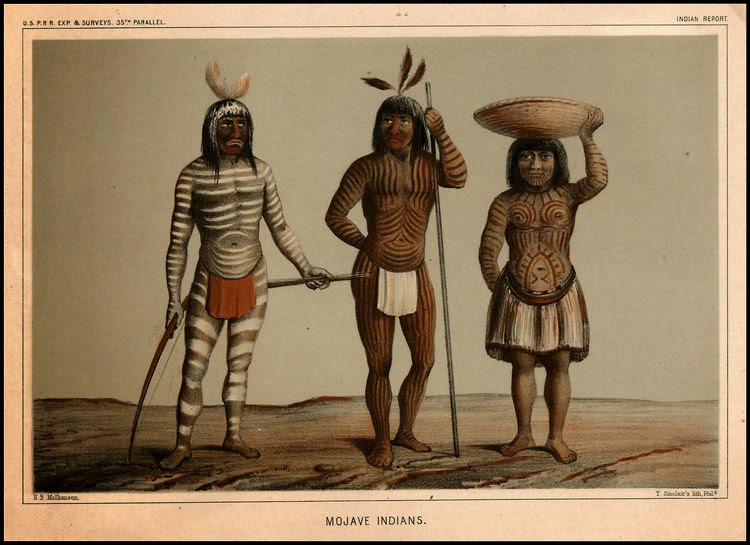 The Mojave Desert has been inhabited by people for some time.  Like most places on earth, the Mojave desert has undergone climate change even before the advent of car exhaust.  But for the last few thousand years before the coming of Europeans, the Mojave has been a desert and has been inhabited by people looking something like those in the picture above.  The need for clothing was minimal and in the absence of clothing to decorate one's body, one could paint directly on one's skin.
Adorning of the body was a normal human urge. 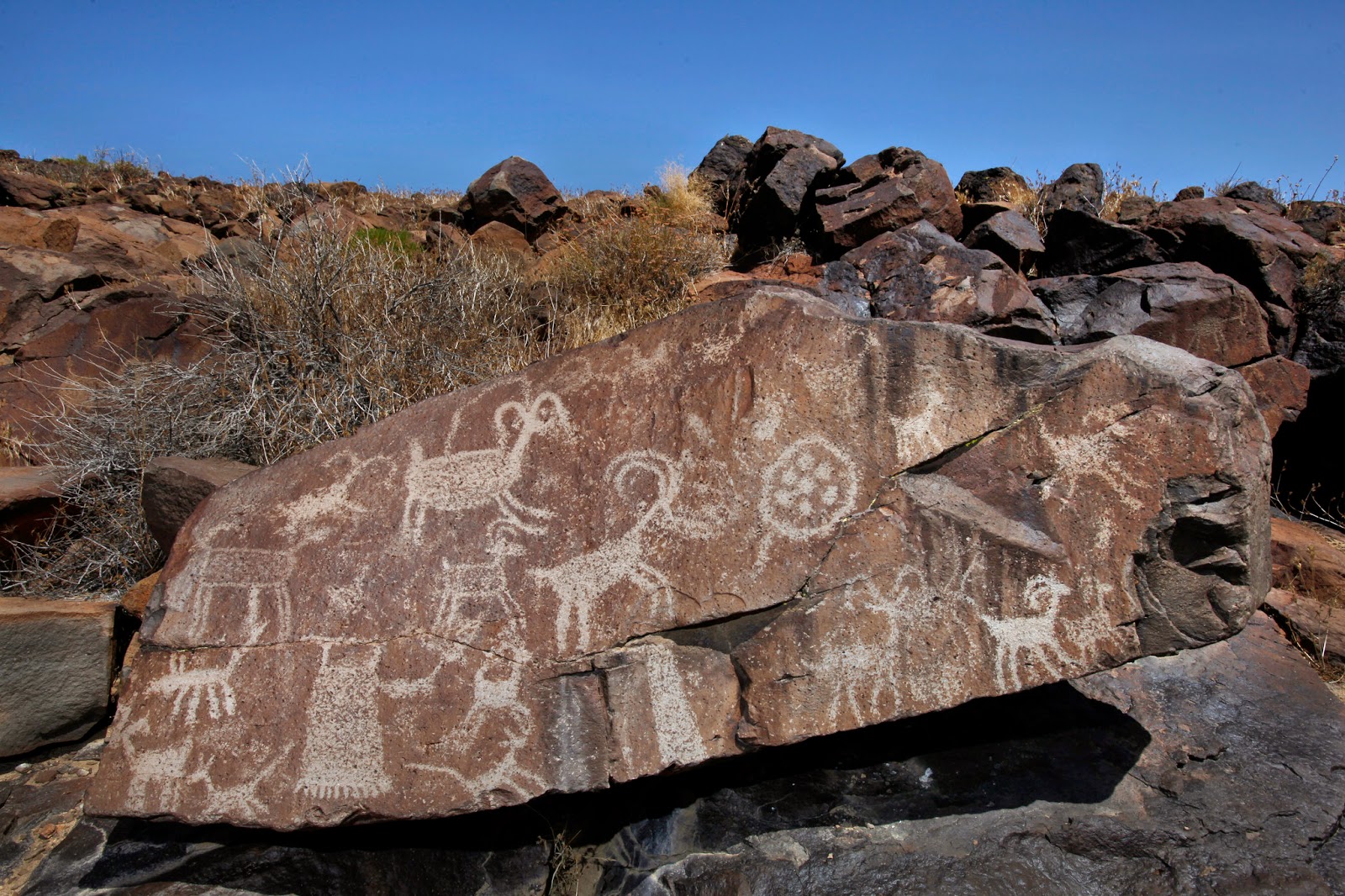 The adorning of one's environment was also a natural human urge.  There is evidence of this throughout the world and the Mojave is no exception. 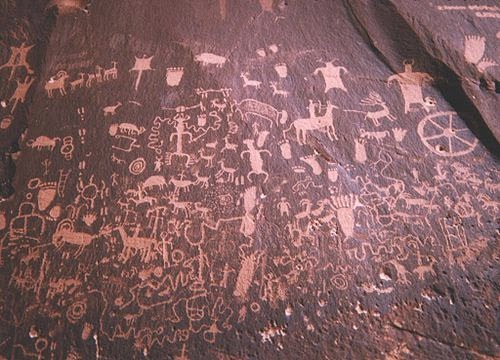 Here is another example of this urge, this collection of petroglyphs being somewhere in New Mexico.
Theories of what these petroglyphs signify abound but there is no clear agreement.  I personally think that the urge to mark one's environment is universal and needs no explanation, but others think differently.
The natives who have lived on this land since before the arrival of the Europeans do not agree with my theory. Author Kenneth Lengner interviewed various members of the Timbisha Shoshone who live in what is now called Death Valley and they told him that petroglyphs were not created by humans but rather by supernatural beings that they call rock babies.  In their view, since the petroglyphs are not created by humans, human urges cannot be said to be the cause of these petroglyphs.  So various anthropological explanations for the origins of the petroglyphs have no merit in their view.

Posted by Wolfgang Brinck at 9:45 AM 2 comments:

Death Valley is one of the driest places in the US.  But it does rain every once in a while and when it does, look out.  Thunderstorms apparently come to the valley every 20 years or so.  The last really big rain was in 2004.  Being such a dry place, Death Valley has little vegetation to hold back the runoff when it does rain.  Given that Death Valley has mountain ranges on both sides of it, any rain in the mountains runs down canyons and rushes out into the valley carrying with it gravel, mud and in many cases, stones of good size.  Since the invention of automobiles, rain also carries automobiles down into the valley along with rocks and other debris.
We encountered one such automobile on one of our hikes up toward Trail Canyon in the Panamint Mountains. 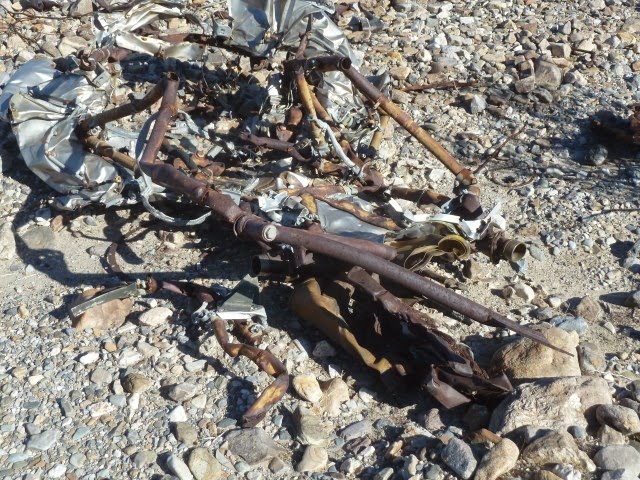 At first I thought that what looked like a dune buggy had caught on fire and then at some later time gotten pummeled by energetic youths. 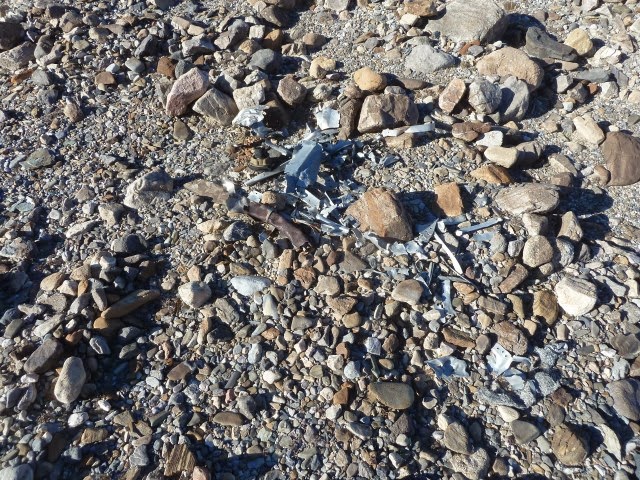 But then we found more debris a little farther up the wash, and it started to look more like the dune buggy had gotten caught in a flash flood and rolled down the hill for several miles and bent up and pulverized in the process, 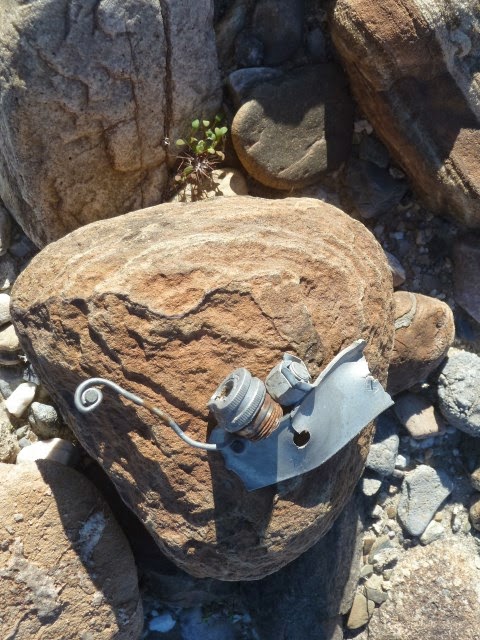 leaving behind parts like this.
On later inquiry, we found out that there had been a big flood in 2004 which had washed a bunch of cars downhill at the Furnace Creek Inn whose parking lot is inconveniently located on the bed of a wash

A guy working at the Borax Museum at Furnace Creek told us that a friend of his lost his car in the flood at the Inn and that the car had never been found, apparently buried under a load of gravel..
In any case, rain is a rare event in Death Valley, but should you ever be there when it does rain, look out and don't be caught in what is a dry creek bed most of the time except when it rains at which time it becomes a wet creek bed transporting tons and tons of rocks and mud downhill toward the valley floor.

Posted by Wolfgang Brinck at 9:15 AM No comments: