This year, Andrew Abyo built an Alutiiq kayak with us. He decided to take the urban kayak approach and go with the plastic ribs. 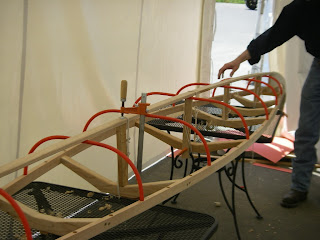 That's Wayne's hand in the picture. Wayne was helping out with both kayaks, the urban Aleut and the urban Alutiiq. 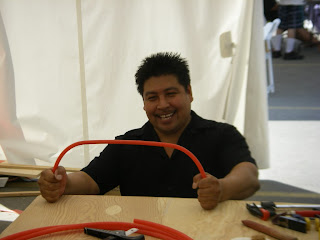 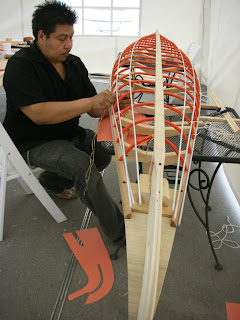 Andrew used some cable ties to hold the hull stringers to the ribs but also did some lashing with artificial sinew. 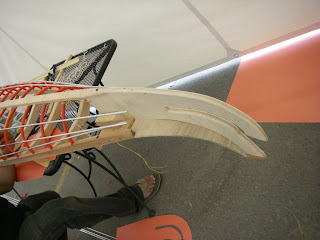 Here's a picture of the bow which we cut from plywood. The paper template is laying on the ground. 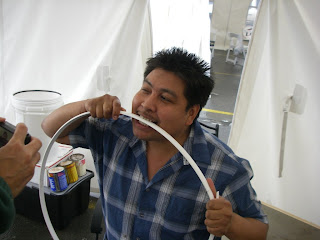 The cockpit rim was plastic as well. Here Andrew is pretend bending it with his teeth the way that people used to do with wood in the days when they lacked materials to make steam boxes. 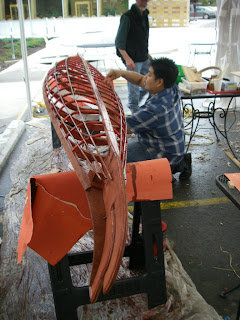 The hull is stained the traditional red and Andrew is just putting on some finishing touches. 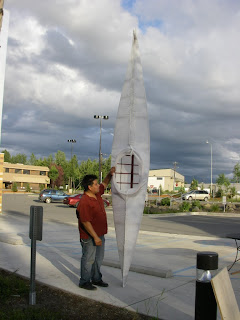 Last day. We almost finished the sewing except around the cockpit. 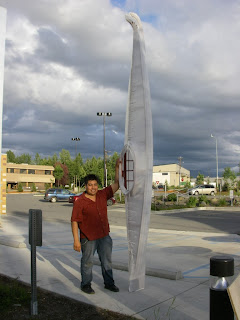 And a side view to show off the nose. 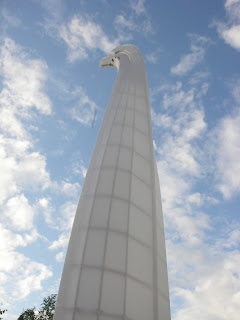 Looks like the head of an eagle, doesn't it? 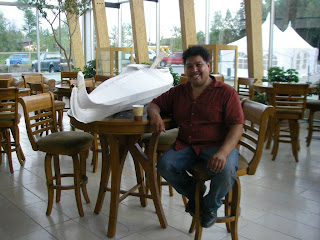 And one final shot of Andrew in the dining hall of the APIA building.
Posted by Wolfgang Brinck at 8:59 AM 6 comments:

This year at culture camp, we built an urban kayak. The idea for this boat was hatched by Mike Livingston. The premise was that a modern Aleut living in an apartment in Anchorage would not have access to a whole bunch of wood working tools but might still want to build a baidarka, an iqyax^. The challenge was to come up with a list of materials that we could pick up at a home supply store like Loew's or Home Depot and without the use of a table saw be able to turn those materials into a usable iqyax^. The other idea was that in spite of the use of non-customary materials, the resulting boat would still be recognizable as an iqyax^. 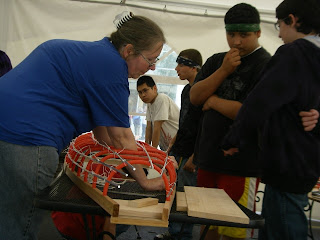 The biggest challenge for making the boat was to find a substitute for steam bending the oak ribs. We settled on flexible plastic water pipe. The pipe bent nicely but not in the shape we wanted. To get the flat mid section, we inserted length of quarter inch aluminum rod in the middle. Gunwales were twelve foot red cedar one by twos. The stringers, as you can see were aluminum rod, and the stringers were attached to the ribs with cable ties.
How plastic can you get. 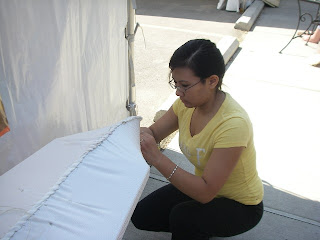 I was skeptical about the chances of getting a decent hull shape, but as it turned out. I needn't have worried. The shape turned out fine. And as you can see above, once the skin was on, the boat looked just dandy, hard to tell that there was all that plastic inside. Never mind that the skin was made out of plastic fiber as well. 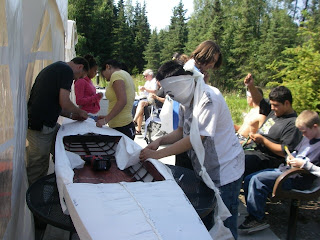 And here we are, sewing on the skin around the square cockpit. This was not meant to be an ocean boat but more something that anyone could step into and paddle without the hassle of squeezing into a small cockpit.
In case you're wondering, one of the kids appropriated some cutoff boat skin and turned it into a mask. 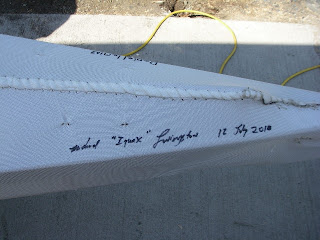 And everyone who worked on the boat signed the skin. 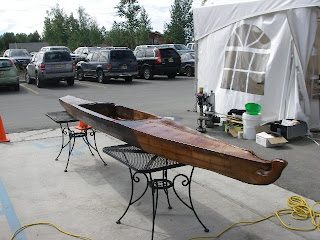 And here's the boat with the faux sea lion hide finish. Ready to launch.
Posted by Wolfgang Brinck at 8:34 AM 2 comments:

Lately, I have been building wider kayaks, both for reasons of comfort and for potential use in sailing. If you want to hang a sail off a boat, you want some stability and stability is achieved by making the boat wider. A wider boat is unfortunately a slower boat to paddle.
So the question is, where is the point of compromise?
Just how much speed do I want to trade off for stability. I ponder this question each time I haul a kayak down to the water.
Last night I paddled one of my skinny baidarkas. I was of course pleased by its speed but also considered that it was not a good beer drinking platform. But when I paddle one of my wide boats, I am pleased by the fact that I can lay back in it and if I wanted to, drink a beer. But then, running my usual circuit once around Alameda's Coast Guard Island, I find that I don't like the drop in speed.
Of course, speed is relative and perceptions can quickly change. If my speed drops from 4 mph to 3 mph, how big a deal is that? What if I just relax, paddle no harder than usual and just take a little extra time to run my circuit?
And here's another revelation. I like how my body feels after I paddle. I always knew that I felt better after I went out in my kayak, but I assumed that that was just something that came from being in a kayak. It is in part, but the largest part of the feelgood response is caused by the effort of paddling.
On summer afternoons, the wind blows from the west on SF bay, and the estuary where I paddle runs east-west and the wind blows straight down it. I have found that with a sail on my wide kayak, I can sail two miles up the estuary, even with the tide going out and then paddle back home. Great stuff for relaxing, but I have found that I miss the feelgood response that paddling produces.
Oh well. The search for the perfect compromise goes on: a kayak that is fast enough for paddling but doesn't have to be wide enough for sailing.
Stay tuned.
Posted by Wolfgang Brinck at 8:17 AM No comments:

Did you say wood?

Yeah, wood.
I'm starting to be of the opinion that with world population pushing on toward 7 billion people, wood is no longer a renewable resource, at least not the kind of wood that used to be used for boats and paddles. It's turning into a material used primarily in the manufacture of luxury items.
Yesterday, my shop partner Sebastian was working on some shelving he had bought at Ikea and was modifying. He sawed through the shelf which was about 2 inches thick. The flat surfaces were made of 1/8 inch of some composite. The sides were faced in plastic. The perimeter was made of chip board and the hollow interior was filled with a paper honeycomb material.
I suspect that in the northern latitudes of the world where trees are small, they do not bother cutting trees into boards. I suspect that they feed it directly into a chipper and then glue the chips into particle board. Wood is the feedstock for an industrial process.
Of course you can't build boats out of the kind of stuff that Ikea makes furniture out of. You need actual wood for that.
Same sort of dispiriting trends that have developed for boat building wood have also developed for paddle building wood. My supplier has piles of Sitka spruce in his warehouse, but he hasn't re-ordered in a while due to the recession and each time I go to get more wood for paddles, I have to pick through more boards to find the few good ones suitable for paddles.
So yes, wood is renewable if you're talking of the stuff you can plant now and harvest in ten years, but boat building wood has always been cut from trees that have had a hundred years of growth or more. Once we cut all of that down, it will be the twenty second century until we can see some more of it, assuming of course that anyone lets a tree stand that long.
Posted by Wolfgang Brinck at 7:58 AM 2 comments: