I know that two, possibly three people follow this blog. Now you have a chance to announce the fact that you follow this blog. Announcing yourself gives me some idea of who's reading the blog and gives me a chance to target its content at a given audience. See followers gadget in the right margin for details. Click somewhere and see what happens. Haven't tried it myself so I'm not sure how it will work.
Posted by Wolfgang Brinck at 9:41 AM 8 comments: 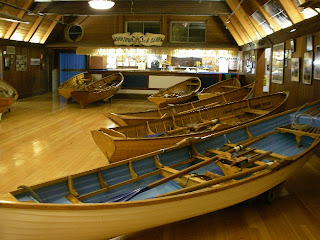 The Dolphin Club in San Francisco is a repository of wooden row boats besides also being a place where members do their swimming in SF Bay. Their row boats are used by members to escort other members who want to swim outside the protection of the cove in front of the club house. The escort system was started after a member was run over by a motor boat back in the sixties. How the club got hold of so many wooden row boats, I don't know, but now that they have them, they need to maintain them. All boats get sanded and re-varnished every five years. Given the number of boats that the club has, they have to do about 5 boats a year.
So every Tuesday night is boat maintenance night. Here are some photos taken this past Tuesday. 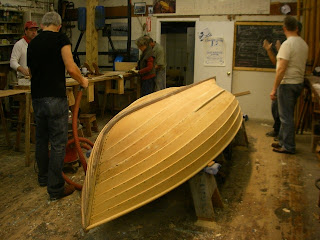 This week's boat all sanded down and ready for varnish. 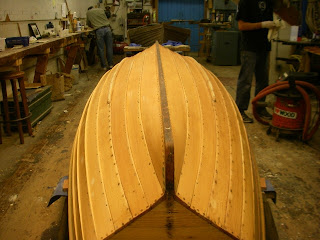 The same boat with a new coat of varnish. Four coats to go. 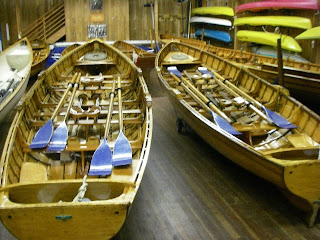 And some more boats, these seating four. Sometimes club members just row. Obviously, these boats are too big to take out just to accompany a single swimmer.
Posted by Wolfgang Brinck at 7:50 AM 1 comment: 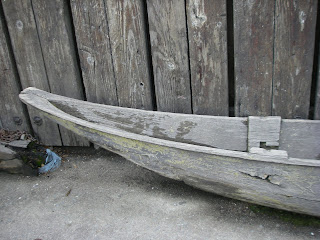 Berkeley has this restaurant called Spenger's Fresh Fish Grotto. I don't know how good their food is, but if you're ever in the area, probably to rub elbows with the area's well-to-do or to spend 15 minutes in line to get coffee at Peet's on fourth street, stop by Spengers to check out their small collection of nautical stuff scattered around the outside of the building.
The most notable item in their collection is a small dugout canoe. I thought for some time that it was local, but am beginning to doubt it. More likely Polynesian. Anyway, here's some pictures of it. 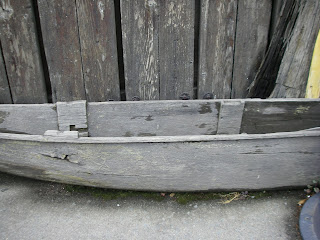 Kinda looks like the fat parts of the hulls are where the amas of the outriggers would have crossed, or is that just where the thwarts went? Don't know much about dugouts. 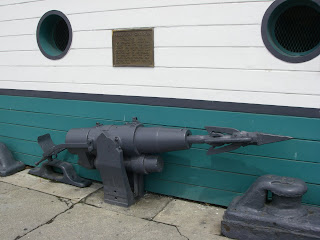 And yes, believe it or not, the SF bay had a whale processing plant until sometime in the 60's over in Richmond. 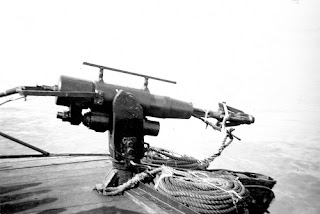 And there's a harpoon on one of the last whale boats.
Posted by Wolfgang Brinck at 7:32 AM No comments: 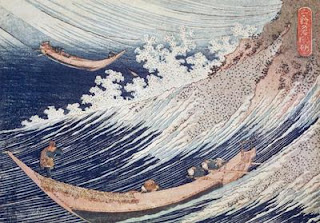 Hokusai has long been my favorite Japanese artist. But for a long time I hadn't looked at his work. Recently, some new Hokusai books were published and I realized that quite a few of Hokusai's wood cuts had boats in them. By western standards, the boats all look curious, square sterned and high bowed. But they do resemble Portuguese surf boats to some extent. 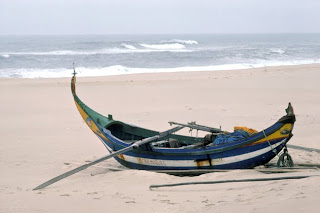 Portuguese had a lot of places where harbors were missing and fishermen had to launch through the surf. As a result, the boats had high bows that would keep the surf from swamping the boats.
Japanese boats apparently had similar conditions to contend with. Makes me want to build some skin on frame small scale surf boats. 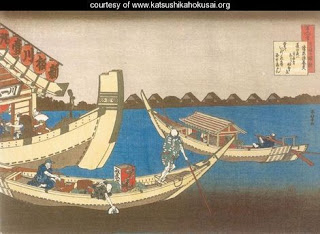 The other curious thing about the Japanese boats is the dotted lines along the edges of the planks. Were these boats sewn together like some Polynesian boats?
Posted by Wolfgang Brinck at 6:43 AM 1 comment: 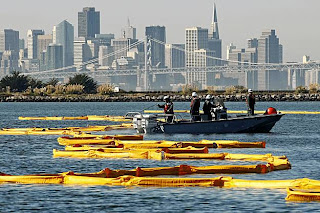 NRC dweebes are getting ready to tow a boom out to the oil spill to contain it.
We're having our annual oil spill here in SF bay. Routine stuff by now. "They", whoever they are closed all the beaches and boat ramps facing the bay here in Alameda to allow workers in hazmat suits dab gobs of oil off rocks and the beach with wads of kleenex. Other fine folks are washing oily ducks. Duck death toll so far is 22, not from being washed I presume, but probably from getting oiled.
Meanwhile, boat testing is suspended since I can't get on the water except by launching off the rocks you see in the background of that picture. There is a little beach that I could launch off, except that is closed right now while another set of contractors is cleaning up the radioactive sewer which the navy used to use to run radioactive waste into the bay. Oh well, it's a toxic world we live in.
Posted by Wolfgang Brinck at 4:03 PM No comments: 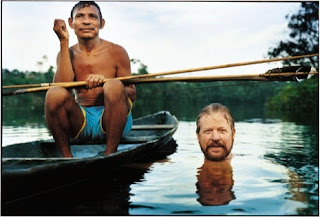 to the right, Daniel Everett, the author of Don't Sleep .. or at least his head and its reflection. We cannot be sure if there is more to him than that.
I am in the process of reading a book called Don't Sleep, There Are Snakes. It's an account of how a Christian missionary goes to the Amazon to bring Jesus to an Indian tribe called the Piraha. The Piraha, it turns out, have the unusual trait of only taking their own experience and the first-hand experience of other living humans as evidence of what is real. This amazing trait has made them immune to 300 years of missionary attempts at conversion. In the end, it is the Piraha who convert Everett, the missionary to their view of seeing and not the other way around.
It isn't that the Piraha have a problem with Jesus, it's just that in their world view, they don't care about Jesus because they can't find anyone who has actually seen him or personally heard what he had to say. And it's not that the Piraha pick on Jesus in particular. They wouldn't care any more for the Buddha or Archimedes or Plato or Socrates or any other person long dead.
The Piraha are pragmatists in the extreme or if you will, Missourians of the Amazon. A brief side bar here about the "Show Me State:"

"There are a number of stories and legends behind Missouri's sobriquet "Show-Me" state. The slogan is not official, but is common throughout the state and is used on Missouri license plates.

The most widely known legend attributes the phrase to Missouri's U.S. Congressman Willard Duncan Vandiver, who served in the United States House of Representatives from 1897 to 1903. While a member of the U.S. House Committee on Naval Affairs, Vandiver attended an 1899 naval banquet in Philadelphia. In a speech there, he declared, "I come from a state that raises corn and cotton and cockleburs and Democrats, and frothy eloquence neither convinces nor satisfies me. I am from Missouri. You have got to show me."

So what does this have to do with boat building?
Plenty.
In the construction of b0ats, people like to make all sorts of claims based on what they've heard or read or believe.
My response, "Show Me."
In the end, there is no substitute for actually building a boat and trying it out to see what it will do. And what better way is there to quickly build a boat to see what it will do than skin on frame.

Let's hear it for the Piraha and Missouri and skin on frame.
Posted by Wolfgang Brinck at 10:21 AM 1 comment: