Here's a video of Moses Dirks reading out the names of Aleutian Kayak parts in Unangam Tunuu, the Aleut language.  The names and the kayak parts are linked in the picture below for reference. The video was made at the Aleutian Pribiloff Islands Association Urban Culture Camp in Anchorage in 2010.

This particular boat suffered the indignity of shrinking skin which caved in a good percentage of its ribs.  So I decided that it was time to rebuild the boat.  Aside from replacing damaged ribs, I also wanted to elevate the rear deck and make the cockpit coaming level.  I had lowered the rear deck to make rolling the boat easier but as it turned out, lowering the back deck simply made it harder to get good back support. So on with the pictures.

Next we will be bending some new ribs, followed by some painting and varnishing and relashing all the stuff that came off during the deconstruction. Stay tuned.
Posted by Wolfgang Brinck at 8:15 AM No comments:

What Are Your Favorite Skin-Boat Related Websites and Blogs?

I'm trying to fill out my list of skin-boat related blogs and websites that have useful information for would-be kayak builders.  If you have any favorites, feel free to list them in the comments.  Feel free to suggest sites even if they are related to canoes or any other small boat building practices.  I will check them out and add them to the list on my website and to the blog roll and like box on this blog.  Thank you.
Posted by Wolfgang Brinck at 12:29 PM No comments:

There's one more part of the playboat overhaul that I should document and that is the relocation of the deck beam at the back of the cockpit after I had already put the skin on the boat.  Messing with the frame is best done when the skin is off the boat, but it wasn't until after I put the finished boat in the water and paddled it that I discovered that it would be better if the back deck beam were a few inches farther back so it would line up with the back of the coaming .  The main problem was that since it didn't line up with the back of the coaming, it jabbed into my back when I was paddling.  It's one of those things that don't reveal themselves till you actually use the boat, kind of like too tight shoes.

And that should be the end of coverage for this kayak remodel unless some other thing comes up that I haven't discovered yet.
Posted by Wolfgang Brinck at 8:34 AM No comments:

Skipping part 5 which is where I decided to add a King Island style nose to the kayak.  The point of this was to elevate the bow to minimize water coming over the bow in oncoming waves.  No pictures of that process available though you can see the end result here.


Postscript:  I launched the boat, found that the back deck beam in the cockpit was digging in my back and so I moved it back a few inches to make the boat more comfortable.  Also needed to put more sealant on the seams since they were still taking on water.  In spite of the extra two feet, the boat is still  pretty low volume for someone my size.  Were I to build another 12 footer from scratch, I would make the stern beamier and raise the bow some more. The End.
Posted by Wolfgang Brinck at 10:16 AM 2 comments:

As promised, I took a can of red spray paint and loosely misted the flat desert storm camo paint I had put on the frame of the playboat.  Made it look a whole lot more traditional. Photos below. 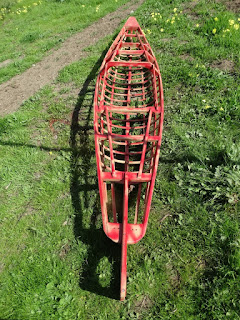 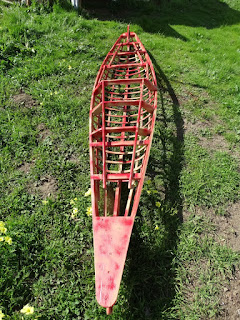 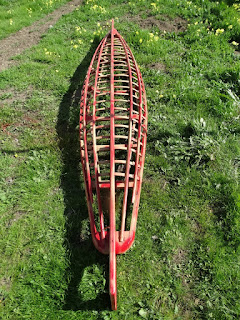 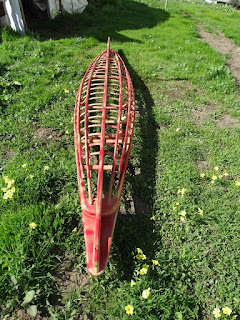 All this by the way happened way back in February as evidenced by the green grass and yellow flowers.  But there's still more to come.  The playboat is going to get  a nose-job and a skin. Can't wait to share.
Posted by Wolfgang Brinck at 11:07 PM 1 comment: