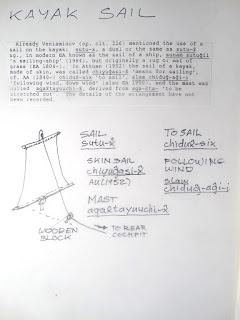 Sails on Aleut kayaks were used early on though probably copied from western sailing craft.  Early sails were made of grass matting or skins though later of canvas. The sail was called sutu-x^.  In Attuan, the sail made of skin was called chiyug^asi-x^.  Sailing was done primarily down-wind which in Unangam Tunuu is slam chidug^-ag^i-i. The mast was called aqax^tayuuchi-x^.  To sail was called chidux^-six^.  When wind was calm or opposing the direction of travel, sails were taken down. 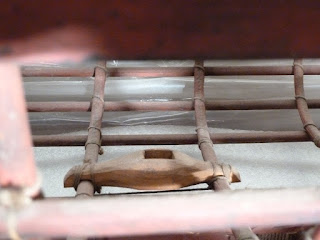 The mast was set into a mast step that was lashed to ribs adjacent to the keelson.  The mast entered the hull through a sleeve sewn into the skin.  The mast was probably also lashed to the deck beam to minimize stress on the skin.
Sailing against the wind would have required lee boards and additional lines on the sail, encumbrances which the Aleuts apparently chose to avoid, probably because they weren't worth the trouble.
Kayaks rigged with sails did, however, have a rudder which was controlled by the paddler in the rear cockpit.  More details on that in a separate post.
Although some single kayaks used sails, the sails were primarily used on doubles which were the preferred craft for hunting sea otters under the Russian regime.

This photo shows a group of paddlers in two-hole kayaks.  The kayak farthest to the right looks like a three-hole kayak.  In all cases, the mast is behind the front-most paddler. The sails are lowered and laying on the decks.

This kayak from an illustration by Elliot shows the sail in its raised position.  Most likely, when the kayak was on land, the sail would have been lowered, but Elliot is allowed some license. The sail was raised and lowered by a line which went from the top of the sail through a hole or block at the top of the mast to a block on the deck.  The line was controlled by the paddler in the rear cockpit. The illustration also shows the rudder.  The rudder was controlled by a line which wrapped around the rear cockpit. 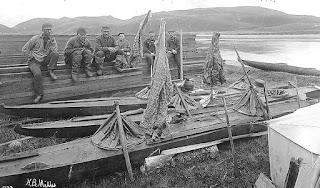 This photo shows kayaks on land.  Spray skirts are tied at the middle and raised up by a stick to form conical tents that prevent rain from getting into the kayaks.  The masts are acting as clothes poles to hang paddling jackets from. 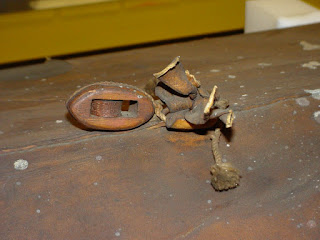 This is the block through which the line runs that raises the sail.  The line goes from the mast right behind the front-most cockpit down to the block and then back to the cockpit behind the sail where that paddler trims the sail.
Posted by Wolfgang Brinck at 8:31 AM 3 comments:

Aleut kayakers carried bailing pumps or bailing tubes on the decks of their kayaks.  To use the pumps, the kayaker would have to loosen the string that cinched the spray skirt around his chest and push the pump down along his chest down between his legs to the bilge of his kayak.  Then he had to bend his head forward to suck up water into the pump, then stopper the bottom opening, lift the pump out of the cockpit and drain the contents of the pump over the side. I have not made one of these pumps but my experience with bottles is that when turned upside down, the contents run out, so most likely, the kayaker needed two hands to pull the pump out of the cockpit without having the water run out the bottom hole back into the bilge.
The bailing pump also had to be sized to be about as long as the distance from the bottom of the boat to the chin of the paddler. 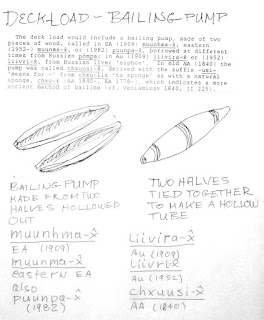 This drawing shows the type of bailing pump or tube that is shaped the same on both ends. The tube was usually carved out of red cedar in two halves which were separately hollowed out and then mated together and held together by three or more sections of twine.
Names for the bailing tube varied from place to place and over time.  The name puunpa-x^ appears to be an adaptation from the Russian word for pump.  The Attuan names liivira-x^ and lliivri-x^ are derived from liv'er, the Russian word for siphon. The name chxuusi-x^ appears to be derived from chxu-x^, the name for sponge.  This hints that the carved wooden tube is a late invention and that in the past, natural sea sponges were used to get water out of the bottom of kayaks. 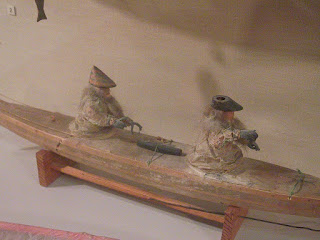 As the model shows, the bailing pump slides under one of the deck lines of the kayak.
Posted by Wolfgang Brinck at 7:14 AM 4 comments:

For the linguistically curious, chag^a-n (amulets) is the plural of chag^a-x^ (amulet).  Charms and amulets probably varied quite a bit from one paddler to the next since they were probably a personal affair.  What worked for one paddler would not necessarily work for the next.  But let's look at some things that might have been charms.


Whether any of these figures were carried in ditty bags is not known.
There were other carved figures about the kayak though some had practical uses like cleats at the ends of deck lines that kept deck gear like paddles from slipping off the deck.

Posted by Wolfgang Brinck at 10:10 PM No comments:

I decided to fight my way through Knut Bergsland's Aleut Kayak Terminology a piece at a time. Rather than starting at the beginning with the kayak itself, I have decided to start near the end, not with the kayak itself but with the sea bag or ditty bag, ug^ada-x^ that an Aleut kayaker would carry with him inside his kayak. The ug^ada-x^ contained a bunch of small items that the kayaker would need to repair his kayak or clothing and also some items he would need to start a fire on shore.
The terms listed here come from page 154 of Contributions to Kayak Studies.
For background on Bergsland see an earlier post of mine on this blog.

I should mention that in drawing up the diagram of ditty bags and ditty bag contents, I did not have any images of what these things actually looked like.  Bergsland mentions that the ditty bags were about two feet long.  That's all I had to go on.  Dry grass, yeah, we know what that looks like, but whether it was just in a lump or if people twisted it up, I don't know.  Likewise, I don't know what Aleut fire drills looked like.  They could be the type I showed which is a pump drill.  But there are other types of fire drills.  I drew a pump drill because Mike Livingston had students make these at Aleut Culture camps.  Same goes for amulets and charms.  They could be just about anything from a pebble to elaborately carved ivory.  As for caul of baby, look that up.

Posted by Wolfgang Brinck at 8:09 AM No comments: