I thought I'd post some more pictures of the Swedish Americas cup boat.  Far as I know, it's the same as all the other contenders' boats except for the paint scheme.  These pictures have no particular significance other than that my shop is right next to Alameda's seaplane lagoon where the Swedish team is keeping their boats and so I see these boats on a pretty regular basis and occasionally feel compelled to take pictures of them when they are looking particularly impressive.


Posted by Wolfgang Brinck at 8:56 AM No comments: 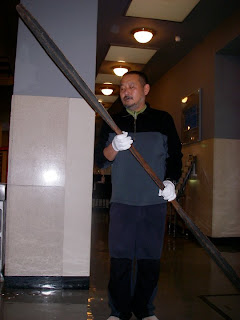 The paddle is quite long assuming the the loom is the usual length of about 22 to 24 inches. 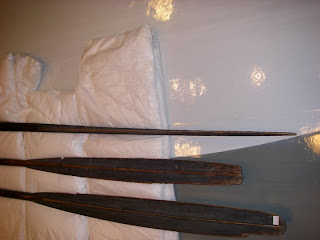 This photo shows three of these double ridged paddles.  The middle one seems to have some damage to the tip. 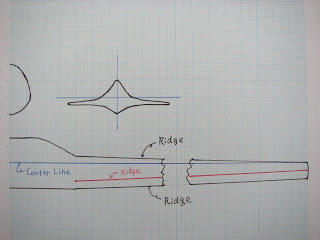 And this is a drawing of the paddle blade and the relative size of the ridges and the location of the blade edge.
It appears that the layout of the blades is similar to that of the single ridge paddles except that the normally slightly convex side of the blade also has a ridge carved into it.  I have taken one of my single ridged paddles which I found to be too stiff and heavy and have carved away at the flat face of it to create a low ridge on that face.  Testing of this configuration is still pending.
One thing that double ridged paddles might eliminate is arguments about which is the right way to hold them, ridge forward or ridge backward.  But since the paddle is not symmetrical, there is still room for argument.  I hope to test my own version of the double ridged paddle soon and report on results.
Posted by Wolfgang Brinck at 7:34 AM No comments:

As residents of the Western United States are probably aware, there have been a number of drought years with negative results on both the crops that need irrigation and on recreational users that like to go waterskiing on the state's reservoirs. 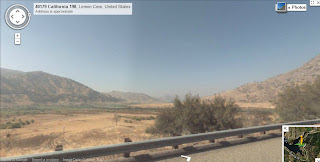 Just recently we returned from a vacation in Sequoia National Park and on our way out we passed Lake Kaweah, one of the many reservoirs at the edge of the Sierra Nevada mountains.  What we saw at the east end of the lake looking west was this. A mostly dry lake.  The remaining water was mostly near the dam.  The whole reservoir looked like it was at no more than 20 percent capacity.

Back home, I went on google maps to see what amount of water was actually left.  Surprisingly, on google maps, the lake looked 100 percent full.
In a way, it made sense for the map makers to fill the lake with virtual water since on maps, the convention is to show lakes up to design capacity.  So it also make sense to make the pictures match the maps. But on zooming in, I also found that while map makers wanted to show water where it was supposed to be and not where it actually was they did at the same time have a desire to show the latest road data.

And here it is, real roads under virtual water.  The deal is, if people are going to be able to launch their boats, you're going to have to build roads up to the edge of where the water actually is, that is several tens of feet below the surface of the virtual lake.
So map makers past fake water on top of the dry lake bed. 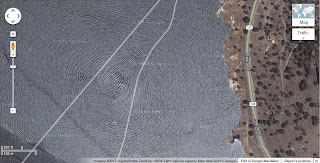 Curiously, in this particular case,  the surface of the virtual water had a cool vortex right in the middle of one of the bays.
I was intrigued and curious if Google followed the same policy of topping off reservoirs with virtual water all around the state of California.  I moved over to San Luis Reservoir just west of Los Banos.  This reservoir was also way down the last time I drove by it. 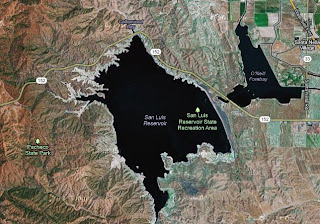 The long view again showed a lake topped off to the brim. 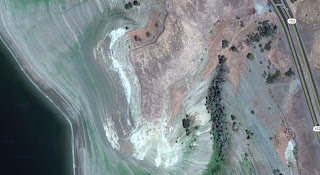 But the closeups showed an un-doctored view, bathtub rings showing previous lake levels and trees growing on former lake bottom.
Research on this topic is continuing.
Posted by Wolfgang Brinck at 8:57 AM No comments:

Why Build Your Own Kayak? 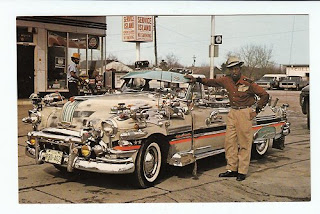 A friend of mine recently posted a picture of a customized car from circa 1970 Houston, Texas.  What struck me about the photo was that the owner of the car clearly wasn't satisfied with the amount of chrome that designers back in Detroit were putting on cars at the time, so he took matters into his own hands and added chrome to a level that he felt was appropriate. 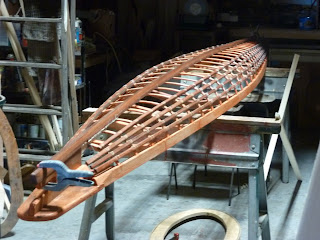 And this same sort of urge, not the urge for more chrome, but the urge for more cool is what led me to start building my own kayaks. It was not about money, it was simply the desire for a superior esthetic over what commercial manufacturers were capable of delivering. Others may disagree.  Many prefer the look of shiny plastic.  I prefer the cool of skin on frame.
Posted by Wolfgang Brinck at 8:02 AM No comments: