Grow your own Boat

The grow your own boat project is going well so far.  All the willow twigs I have stuck in the ground along the fence line at the shop have sprouted except for the ones that shop neighbor Tim's dog Shasta has dug up. Shasta loves to dig up ground squirrel burrows.  So, at last count, I have something like 50 willow plants growing.  There will probably be several withes per plant, probably enough total to make a basket. I think boat rib size twigs take at least two years to grow. We will find out. 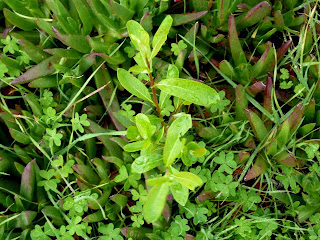 Here's a typical sprout. I have one row growing north south of which this is a specimen. I have another row growing east west which is getting shaded by ice plants and is a little slower coming up. 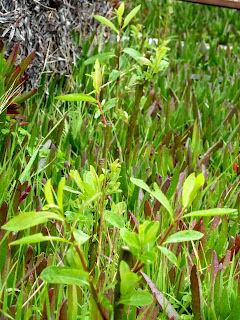 And here's a shot down the east-west row, an attempt to show more than one plant at a time.  Problem is that green is a marvelous camo color for a green background. 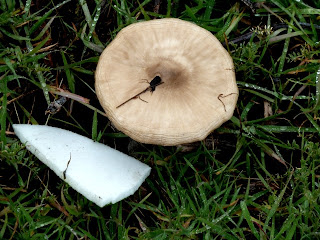 And among all this stuff, a mushroom pops up as well.  Don't know what it's called, but a mycelium is a good thing to have in a plot where you are trying to grow something.  That white thing next to the mushroom is a piece of plastic foam.  Don't know what the significance of that is other than that plastic is ubiquitous and we need some plastic eating mushrooms.
Posted by Wolfgang Brinck at 7:23 PM